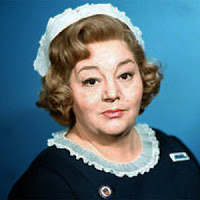 Best known for: Larger than life comedy actress who is most famous for being part of the repertory company of actors who made up the Carry On film franchise team, in particular playing Matron in the various hospital-themed installments. Between 1949-1965 Hattie was married to fellow actor John Le Mesurier (best known as Sergeant Wilson in the BBC sitcom Dad's Army).

Hattie had enjoyed a successful career almost constantly since the late 1940s, both as part of the Carry On team and outside of it. Although she appeared in a total of 14 Carry On films between 1958-1974, she also had great success alongside comedy actor and writer Eric Sykes in his various TV shows, including 59 episodes of Sykes and a... (1960-65), The Plank (1967) and 68 episodes of Sykes (1972-79). She also worked with Tony Hancock and Frankie Howerd, and appeared in 26 episodes of a now largely forgotten sitcom called Our House (1960-62), co-starring the likes of Norman Rossington and Charles Hawtrey.

Most of Hattie's final decade was taken up professionally by the aforementioned Sykes sitcom and her Carry On commitments (as well as the films, Hattie also appeared in a 1972 Carry On Christmas special and a 1975 episode of the Carry On Laughing TV series). Other projects in the 1970s included episodes of the TV series Catweazle (1970) and Doctor At Large (1971), the children's adventure film Danger Point (1971), and the bawdy comedy film Three for All (1975).

Hattie's role in Carry On Abroad (released December 1972) was markedly reduced in comparison to her earlier franchise appearances, and during post-production the film's insurers became concerned about Hattie's deteriorating health and subsequently told producer Peter Rogers they would be unwilling to insure her on future Carry On films. Nevertheless, Hattie did make one other Carry On film appearance, in 1974's Carry On Dick.

The year 1974 was not a great one for Hattie. Her sons Robin (then aged 21) and Kim (aged 18) were both arrested and charged with the possession of cannabis, and her house searched by police. This happened the same week she was told she was in the running for an OBE in the Queen's Honours List, but to avoid further press intrusion for her sons, she declined the offer. Robin and Kim were eventually fined £20 each. Robin went on to forge a successful career as a session guitarist; however, Kim had a more tragic demise...

In the autumn of 1974 Hattie suffered a cancer scare and lost a considerable amount of weight. She completed filming of the third series of Sykes, and in early December underwent surgery at Charing Cross Hospital for what turned out to be benign tumours on her kidneys.

Between 1976-79 Hattie took part in a number of stage tours of the Sykes sitcom with Eric Sykes. It visited places in the UK (including Torquay, Lincoln and Bournemouth) as well as overseas, such as Hong Kong (1977), Rhodesia and Australia (1978), Canada (1978-79) and South Africa (1979). It was while visiting Blackpool in 1977 that Hattie's health became problematic as she suffered from arthritis and ulcerated legs and had to have her legs bandaged every day. She was given a ground floor dressing room so she could avoid stairs, but Sykes misread this as an attempt by Hattie to get preferential treatment, and relations between the two became strained. While touring the show in Rhodesia (now Zimbabwe), Sykes made accusations of her behaving unprofessionally, and by the time the tour reached Brighton in 1979 the relationship between the two was rapidly deteriorating, despite mutual admiration in public.

Hattie's final appearance in Sykes was the episode The BBC Honours Sykes, co-starring Les Dawson and Hugh Burden, broadcast on November 16th, 1979. The last shot of Hattie is of her walking out of the office of the Head of BBC Light Entertainment - how fitting! It's a pity she has next to nothing to say or do in the episode though.

Soon after this Hattie was one of the guests paying tribute to Eric Sykes on a special edition of This is Your Life dedicated to him and broadcast on Christmas Day, 1979. In his autobiography, Eric wrote: "My darling television sister Hattie was there – in fact my life wouldn't have been the same without her. What a fitting way to end the programme."

Hattie's very last professional work was also an Eric Sykes project, the 28-minute comedy short Rhubarb Rhubarb, made for Thames Television and broadcast on December 15th, 1980 - just over two months after her death. It was a remake of Sykes's 1969 original, and Hattie reprised her role as the Nanny, with co-stars Bob Todd, Jimmy Edwards, Beryl Reid, Charlie Drake, Bill Fraser, Roy Kinnear and many more.

By October 1980 Hattie's weight had risen considerably (reportedly to around 20 stone (130kg)), and she was struggling with breathing problems. She was admitted to Charing Cross Hospital for treatment, but took a weekend break from hospital and returned to her home on Eardley Crescent, Kensington, where she died of a heart attack and kidney failure on October 6th. She was 58.

Hattie's funeral was held at Putney Vale crematorium, and her ashes scattered there. Eric Sykes was refused permission to attend by her sons as they were unhappy at the way their mother had been treated. On November 10th, a memorial service was held at St Paul's in Covent Garden (aka the Actors' Church), described by Carry On co-star Kenneth Williams in his diary: "It was very full. The choir sang Hattie's favourite songs, then John Le Mesurier talked about Hat and her varied activities (she was a welder in a factory during the war!) and then after a hymn I spoke about my work with her, and finished mentioning the line 'Sweet as a kiss on a winter's day' from the record she gave me, and the George Eliot* quote about 'the comfort of feeling safe with a person'.

In 2011, Hattie's son Robin said in an interview with the Daily Express: "I gather Mum had told a few people she wasn't long for this world but I wasn't one of them. She was quiet about her health – she'd had cancer scares and wouldn't admit to them. When I'd spoken to her that June, I said I was planning to get married in England that October, and she said 'No, get married now'. which, on reflection, was ominous. I did as she asked, but in Los Angeles in August, and Mum was sadly unable to make it, I believe because of work. Not long after, she died. When I heard the news it felt as if something had been torn out of me. And it was very difficult because I was in LA. I arrived in London two days later and stayed for two weeks and it rained every single day except the day of the funeral, which was cold but beautiful. Someone like your mum is irreplaceable."

Robin's brother Kim (aka Jake) died in 1991, after becoming a heroin addict. Robin said: "The day before Mum died Jake had an argument with her. That affected him really badly. We became closer and talked a lot. It's strange that he died on the 11th anniversary of Mum's death but I believe that was just a coincidence."

A bit of fun: On February 12th, 1963 Hattie was the star of her own This is Your Life, hosted by Eamonn Andrews:

Posted by My Old School Books at 1:31 pm