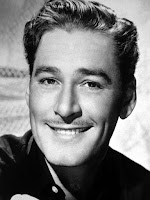 Best known for: The ultimate swashbuckling Hollywood hero who portrayed big screen idols with natural flair, but whose silver screen persona became off-screen reality, leading to a sorry decline. He hit the big time in the title role of Captain Blood (1935) and starred in smash after smash in films such as The Charge of the Light Brigade (1936), The Adventures of Robin Hood (1938), The Sea Hawk (1940) and They Died with Their Boots On (1941).

Errol wasn't even a decade into his Hollywood matinee idol stardom when the outbreak of World War Two - or rather, the attack on Pearl Harbour in 1941 which forced the United States to get involved with the European conflict - signalled the beginning of the end. In August 1942, aged just 33, Errol failed to pass the requisite medical tests to allow him to enlist in the US Army - the results of his physical exam showed he had multiple cardiac problems, recurrent malaria (contracted in Papua New Guinea in the 1920s), chronic back pain (which he soothed by taking morphine and heroin), chronic tuberculosis (not helped by his smoking) and various venereal diseases (Errol was a notorious bed-hopper).

Warner Brothers struggled to match the physical prowess of Errol's public image with the sickly reality, and when his failure to pass the enlistment tests got out, his credibility as an action hero began to wane. He spent the war years desperately trying to convince cinema-goers that he was still the same man who swung from ropes and buckled swashes in his 1930s heyday, but films such as Dive Bomber (1941), Northern Pursuit (1943) and the controversial Objective, Burma! (1945) failed to do the job, and his box office power faltered.

After the war, Errol started to branch out into different areas to bolster his income and fame. In 1946 he published a romantic adventure novel called Showdown, first in Australia, then in the UK, which drew upon his own experiences in New Guinea as a teenager. There were reports at the time of a second novel in the works, Cuautenos, about Montezuma's nephew fighting Conquistadores, but this never got finished.

Throughout the 1950s Errol struggled to get back the hard-hitting, action-packed, leading man roles he was used to before the war, and continued to struggle with his health. In 1952 he was seriously ill with hepatitis resulting from liver damage, caused by his addiction to alcohol and drugs.

In 1956 he made the first tentative step onto television screens, a little earlier than many of his Hollywood contemporaries. He played French adventurer Francois Villon in a Screen Directors' Playhouse presentation of The Sword of Villon, made by silent era legend Hal Roach and broadcast in April 1956. It was not the resurgence he craved, and at the age of 47, he was physically much plumper and older than the role required.

Between 1956-57 Errol hosted his own half-hour anthology series of adventure yarns under the umbrella title of The Errol Flynn Theatre, appearing in two stories himself, as Don Juan, and as a 17th century English royalist.

Toward the end of his life Errol Flynn was a sorry shadow of his former glory. He was noticeably older and fatter, of declining health due to his drinking, drug-taking and general carousing, and the millions he'd made as a screen idol in the 1930s were rapidly evaporating, particularly in 1954 when he decided to co-finance his own film, The Story of William Tell. This $860,000 film was never completed because the Italian backers pulled out. Errol had to foot the bill as creditors seized sets and camera equipment, as well as the actor's own possessions, such as his car and furniture. He insisted for some time afterwards that the venture could be re-staged, and as late as 1956 said he had $340,000 of his own money invested in the film, but it never got finished. Around 60 seconds of footage from the existing rushes appeared in a TCM documentary on Errol, but since then it is believed the footage has been lost, and the Flynn estate remains tight-lipped on the subject. Interestingly, the $10,000 ski resort set built for the film still stands today, and was converted into a real ski resort at Courmayeur in the Valley d'Aosta, near Mont Blanc, Italy.

In late 1958 Errol flew to Cuba to film the self-produced B-movie Cuban Rebel Girls (aka Assault of the Rebel Girls). This was a strange film in that it featured Errol as himself (an "American correspondent" working for the Hearst Press) helping Fidel Castro overthrow Cuban dictator Fulgencio Batista, and indeed the actor met with Castro during his visit to the country, and became a supporter of the Cuban Revolution. He also wrote numerous newspaper articles about his experiences in Cuba, thought lost until they were unearthed in Texas in 2009.

Cuban Rebel Girls was released posthumously on Christmas Day, 1959, as his last acting role, but his connection to Cuba did not end there. In November 1960, a 50-minute documentary was released in East Germany entitled Cuban Story (aka The Truth About Fidel Castro Revolution) which Errol had provided on-screen introduction and summary for. However, his performance is rambling, perhaps due to his alcoholism and a lack of script. Cuban Story was forgotten about for decades until it received its North American premiere in New York in 2001. You can watch a scratchy copy here, but it is Errol's unfocused appearances at the beginning and end which hold the most interest.

It was after completing his work on the Cuban films that Errol flew to Vancouver, on Friday, October 9th, 1959, to try and ease his financial woes by selling his beloved sailing yacht Zaca to businessman George Caldough. Five days later, Caldough was driving Errol and his girlfriend Beverly Aadland to catch a Los Angeles-bound flight when the actor complained of severe pains in his legs and back. Caldough drove to his doctor Grant Gould's house, who assumed the actor was suffering from degenerative disc disease and spinal osteoarthritis and administered 50mg of Demerol intravenously. Errol's pain eased and Dr Gould advised him to rest before resuming the journey to the airport. Gould, Caldough and Aadland left Errol alone for 20 minutes, but when his girlfriend returned to check on him, the actor was unresponsive. He was rushed to Vancouver General Hospital but was pronounced dead that evening, having never regained consciousness. The coroner ruled that he had died of a heart attack, together with cirrhosis of the liver and diverticulosis, at the age of 50. He was survived by both his parents, all three of his former wives and all four of his children. He was buried at Forest Lawn Memorial Park in Glendale, California.

A rather unpleasant, but still diverting, aside to Errol's death was the findings of the coroner's examination. In his memoirs published in 1985, Vancouver coroner Glen McDonald recalls that chief pathologist Tom Harmon discovered several rather large genital warts on Errol's penis.

"Tom Haddon seemed fascinated [and said] 'Look, I'm going to be lecturing at the Institute of Pathology and I just thought it might be of interest if I could remove these things and fix them in formaldehyde and use them as a visual aid'. 'No way!' I said, 'we're not going to do that. I don't want anything done that isn't relevant to the case because we're really in the limelight tonight. How can we send Mr Flynn back to his wife with part of his endowment missing?'

However, McDonald recalled that after he returned to the observation room after a brief absence, the venereal warts have disappeared: "The first thing I noticed was that the VD warts had vanished from the end of Mr Flynn's penis. Then I spotted a jar of formaldehyde on a shelf that looked suspiciously like it might contain VD warts. Tom looked sheepish but we were both laughing at the utter silliness of the whole thing. I never did figure out why the temptation had been too great. So the warts were fished out of the formaldehyde jar and, using tape, Harmon and I stuck them back where they belonged. Everything was back to normal. I was relieved to learn later, talking with the Chief Coroner in Los Angeles, that a further autopsy was performed and the results concurred in every respect with what we had found. The tape was never mentioned."

Tragedy continued to dog the Flynn dynasty after Errol's death. The actor had four children, but only one son: Sean, born in May 1941 to Errol's first wife, the French-American actress Lili Damita. Sean became an actor in his father's footsteps in the 1960s, including The Son of Captain Blood and Temple of the White Elephant. Bored with acting, Sean Flynn branched out into becoming a safari guide and big game hunter and warden in Kenya, and in 1966 took up photojournalism in South Vietnam, working for Paris Match, Time Life and United Press International. He also covered the Arab-Israeli conflict in Israel, but worked principally in Vietnam and Cambodia.

In April 1970, a 28-year-old Sean was captured by Viet Cong guerrillas in Cambodia and disappeared. Sean's true fate has never been established, but current thinking is that he was held captive for over a year before being murdered by Khmer Rouge in June 1971. Sean's mother Lili spent a lot of time and money trying to find her lost son, but finally declared him legally dead in 1984. There was a brief flourish of hope that Sean's remains had been found by a British expedition in Kampong Cham province in March 2010, but DNA tests proved negative.

A bit of fun... Neither Errol or Sean had a happy ending, so here's a fan-made music video tribute to Errol, to the soundtrack of Coldplay's Speed of Sound.

Posted by My Old School Books at 4:17 pm