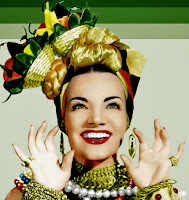 Best known for: Singer, dancer, Broadway star and film actress who made it big on the big screen in the 1940s with films such as Down Argentine Way (1940) and The Gang's All Here (1943). She is particularly remembered for her fruit hat and extravagant appearance.

The Brazilian Bombshell became a massive star in the 1940s, being invited to sing for President Roosevelt, and becoming the highest paid woman in the United States in 1945 (in excess of $200,000). However, in the years following the war, Carmen's popularity waned, and she became frustrated with her constantly being labelled the "Brazilian Bombshell" when she felt she had much more to offer. Her career turned gradually away from movies and onto the television, appearing in variety spectaculars as well as returning to her roots performing in nightclubs.

She made her final Twentieth Century Fox film, Doll Face, in 1945, and then fell into the routine of appearing in one film a year until her big screen career stalled following 1948's A Date with Judy. The American public were not keen on the new image Carmen was trying to forge, branching away from the familiar colourful Latin American personality in favour of more meaty roles. Although her singing career was still solid, her acting appearances petered out, and her final cinema outing was 1953's Scared Stiff, a musical vehicle for Dean Martin and Jerry Lewis (the latter of whom actually impersonates Miranda in the film, miming to her voice).

After completing recording on Scared Stiff, Carmen began a European tour, but once back in the US in October, she collapsed from exhaustion in Cincinnati. This led to her suffering from depression, and she underwent electroshock therapy in an effort to combat her mental illness. However, this did not seem to work, and she decided a return to her roots might help. She returned to Brazil in December 1954, but returned to the US the following April.

By this point in her life Carmen was a heavy smoker and drinker, and also took barbiturates and amphetamines, which affected her health adversely. Her final professional performance came on Thursday, August 4th, 1955, when she recorded the number Jackson, Miranda and Gomez for the Jimmy Durante variety show. She had complained of feeling unwell during the recording, and after completing her number with Durante, fell to one knee, claiming she had lost her breath (this can be seen in the show at 25m 30s). Recording drew to a close at 11pm, but at 4am the next morning Carmen suffered a fatal cardiac arrest and passed away, aged just 46.

Miranda's body was flown back to Rio de Janeiro where the Brazilian government announced a period of national mourning. Around 60,000 people turned out for her mourning ceremony at Rio town hall, and 500,000 Brazilians escorted her funeral cortege to her resting place at Sao Joao Batista Cemetery in Rio de Janeiro. The following year her husband David Sebastian donated all of her belongings to the creation of a Carmen Miranda Museum, which finally opened its doors in Rio on the 21st anniversary of her death, in 1976.

The Jimmy Durante Show featuring Carmen's very last performance, recorded just hours before her death, was broadcast on October 15th, 1955. Here it is in full: it's pretty low quality but the energy and fire she puts into her performance shows what a professional she was literally to the end.

Posted by My Old School Books at 3:50 pm