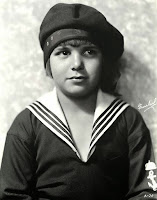 Best known for: His role as the eponymous child star in Charlie Chaplin's silent classic The Kid (1921), and much later in his career as bald-headed Uncle Fester in the sitcom The Addams Family (1964-66). He was also married to Hollywood starlet Betty Grable between 1937-39 - his first of four wives.

Making his earliest film appearance at the age of three, Jackie was the world's first child star, and the first one to go through the now familiar trappings and pitfalls of growing up and being a "former child star". After his rise to success and fame thanks to Chaplin, he became the first actor to be actively merchandised by Hollywood, and his face could be found on everything from peanut butter to whistles.

Jackie went into education but was never very good at it, finding it hard to shake off the shadow of The Kid, and in 1935, aged 20, was the sole survivor of a car accident in San Diego which killed his father and three others. His financial situation was also in dire straits as his mother and stepfather had taken every penny he ever earned. Jackie sued them in 1938 but was awarded only half of the $250,000 earnings which were left. Chaplin stepped in to give Jackie $1,000 when he fell on hard times. Jackie's struggle with his parents to see some of his own earnings resulted in the 1939 California Child Actor's Bill, which insisted that a child actor's employer reserve 15% of their salary in a trust; this is often called the Coogan Law.

Between 1939-47 Jackie did not make any screen appearances, as he was instead engaged in duties for USAF during World War Two, serving in India and Burma (he was the first glider pilot to land Allied troops behind enemy lines in Burma). After the war he returned to acting, and made a great many appearances in films and TV, including the regular roles of Stoney Crockett in 39 episodes of the Western series Cowboy G-Men (1952-53), and Sergeant Barnes in 26 episodes of the military sitcom McKeever and the Colonel (1962-63).

Of course, securing the memorable role of Uncle Fester in 61 episodes of The Addams Family gave Jackie a second shot at fame, but after the series was axed, his career reverted back to the odd guest appearance in other shows, such as The Virginian (1966), The Outsider (1968) and I Dream of Jeannie (1969). As the 1970s wore on he found himself having to trade more on his child star and Addams Family successes, appearing on chat shows such as Merv Griffin and Joey Philbin, and he even provided the voice of an animated Uncle Fester in a 1972 Scooby-Doo TV movie.

The guest appearances continued right into the 1980s, although there were fewer with each passing year, and Jackie reprised his role as Uncle Fester in the reunion TV special Hallowe'en with the New Addams Family (broadcast October 30th, 1977).

After 1980's Dr Heckyl and Mr Hype (a film starring Oliver Reed as an ugly podiatrist who takes a magic formula and turns into a handsome but violent ladies' man; Jackie played Sergeant Fleacollar), Jackie retired from acting, making only one more screen appearance. In 1982, aged 67, he had a cameo as the owner of a magic shop in The Escape Artist, which coincidentally starred Raul Julia, who would go on to play Gomez in the film versions of The Addams Family in the 1990s.

Jackie's last TV appearance was being interviewed, aged 68, for Kevin Brownlow and David Gill's masterful Unknown Chaplin documentary series, which documented the career and work of Charlie Chaplin. Jackie was interviewed for the second episode looking at The Kid.

There was one posthumous screen appearance for Jackie. In November 1984, eight months after his passing, he appeared as forest ranger Lester Tile in the cheap slasher flick The Prey, which had actually been filmed in 1978 but struggled to find a distributor until New Line Pictures picked it up six years later. In another spooky coincidence, the monster in this woeful horror film was played by one Carel Struycken, who would go on to play butler Lurch in the film versions of The Addams Family in the 1990s. That means a future Addams Family cast member appeared in Jackie's final two screen productions!

On March 1st, 1984, aged 69, Jackie died of cardiac arrest after being rushed to Santa Monica Medical Center in California shortly before midday. He died two hours later, with his fourth wife Dorothea at his bedside. He was buried at the Holy Cross Cemetery in Culver City, the home of so many movie productions since the 1920s.

A bit of fun: During the filming of The Kid in 1920, Chaplin recorded this footage of a young Jackie Coogan entertaining the cast and crew on the backlot. It's delightful, and sees the six-year-old Jackie in much happier, innocent times.