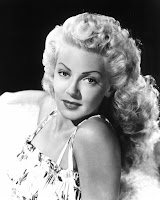 Best known for: Hollywood starlet of the 1940s and 50s who made her name as a femme fatale in films such as Dr Jekyll and Mr Hyde (1941), The Postman Always Rings Twice (1946), The Bad and the Beautiful (1952) and Peyton Place (1957, for which she was nominated for an Oscar, losing out to Joanne Woodward).

As Lana reached the Big 4-0 it seemed her presence in Hollywood movies began to suffer slightly. Although she continued to secure big screen roles throughout the 1960s, a turning point came with 1962's Who's Got the Action?, a perfectly fine but less than memorable madcap comedy co-starring Dean Martin. After this, there was a three-year gap in Lana's CV, recommencing with November 1965's Love Has Many Faces, a lurid, camp drama in which Lana plays a rich society vamp whose marriage to Cliff Robertson is thrown into jeopardy by the advances of the very handsome, very rugged and very hirsute Hugh O'Brian. It made more than $1m at the box office, but did little for Lana's reputation.

March 1966's Madame X was a soapy melodrama more suited to the serial dramas of the small screen by this time, and signalled the direction the rest of her career would take. At 45, although still an attractive woman, she was no longer the beautiful Hollywood femme fatale she had built her name on. There was a gap of three years before her next starring role, in April 1969's The Big Cube, another soapy damp squib which, as well as the acting talents of Lana Turner and George Chakiris, also boasted a good amount of LSD-induced hallucinations, and bare
breasts and buttocks, things that seemed to sell well in the late 1960s/ early 1970s. Lana was approaching her 50th birthday but was still acting like a sex kitten in her twenties. Perhaps that was what she was employed to do, but by this point it feels a little awkward.

This preponderance for soap saw its inevitable fruition with Lana's transfer to television in the soap opera The Survivors, in which she played Tracy Carlyle Hastings. The venture was a huge flop for ABC and was cancelled mid-season, with its fifteenth and final episode airing on January 12th, 1970.

The 1970s garnered few acting roles for Lana. There was 1974's Persecution, a wonderful horror thriller in which Lana plays a vengeful mother and cat-lover. The subject matter is uncompromising - as a boy, Carrie Masters' son David drowns her beloved pet cat Sheba in its own milk, claiming she loves it more than him. When David returns to his mother's house all grown up, with a new wife and baby, his mother's latest Sheba suffocates the child while Carrie is intent on ruining his marriage by employing a nurse to come between him and his wife. All still very soapy, and sadly not all that slickly produced, but it was written by the expert Don Chaffey and co-starred Hammer's Ralph Bates and Trevor Howard. It also won Lana a Best Actress award at the Sitges-Catalonian International Film Festival of 1975, so it must have pleased someone.

There was more melodrama with Bittersweet Love in 1976, by which time Lana was 55 and at that age where she was getting typecast as drama queen mother figures a la Bette Davis and Joan Crawford. Then there was the lamentable 1980 horror comedy Witches' Brew (aka Which Witch is Which?). It proved to be Lana's final big screen acting role, at the age of 59.

Lana's final work was back on TV, playing Jacqueline Perrault in six episodes of the soap opera Falcon Crest between February 1982 and March 1983. Confrontation scenes between her character and star Jane Wyman had to be recorded separately as the two actresses allegedly did not get on, although Lana denied the feud in an interview on The Phil Donahue Show.

Lana's last role was Elizabeth Raley in two episodes of The Love Boat in May 1985, when she was aged 64. It was a disappointing end to an enviable career. The truth is that Lana, by her own admission, had spent much of the 1970s on a "downward slide", drinking heavily, barely eating, missing performances and at one stage weighing just 95lbs (less than 7 stone). However, she did manage to pick herself up again, turning to organic food, celibacy and spirituality, experiencing what she described as a "religious awakening" in 1980, becoming a devout Roman Catholic.

One of Lana's last screen appearances was aged 66 on the TV special Happy 100th Birthday, Hollywood, on May 18th, 1987, where she appeared along with a cornucopia of other movie starlets such as Dorothy Lamour, Lillian Gish, Eve Marie Saint, Cyd Charisse and June Allyson to celebrate Heroines of the Silver Screen.


Her screen swansong came in an interview conducted in 1994 in which she speaks about being given only seven days to live by doctors following a lung infection, but how she was sure God hadn't done with her yet and wanted her to do so many other things "in his name". Her religious convictions were worn on her sleeve, and the honesty with which she talks about her cancer - and how she wanted it to be taken away so she could get on with things - is powerful. She is also enthusiastic, fiery and ultimately happy with her lot in this final interview, which makes her demise all the sadder.

Lana had been a lifelong heavy smoker, and in May 1992, aged 71, she was diagnosed with throat cancer. A little too late perhaps, she quit smoking straight away, and nine months later proclaimed to be cancer-free. Sadly, it came back, in July 1994, and Lana finally succumbed to the disease on June 29th, 1995, aged 74, at her home in Century City, LA. Her remains were cremated.

In her will Lana left her only child Cheryl Crane and her partner Joyce LeRoy $50,000 and most of her personal belongings, but the majority of her estate - a further $1.65m - to her maid of 45 years, Carmen Lopez Cruz, who had also been her carer in her final years. Cheryl contested the will, but Cruz claimed much of the estate had been soaked up by legal costs and Lana's final illness.

That 1994 interview Lana conducted is well worth a watch, if only to see how determined she was in the face of illness at that time. Her voice is croaky and cracked, a result of the first diagnosis for throat cancer which would return to claim her life soon after this interview was carried out...

Posted by My Old School Books at 1:02 pm