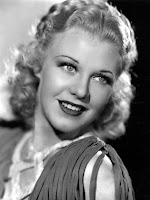 Best known for: Singer and dancer most remembered for her timeless partnership in 10 musical films with Fred Astaire, but who also enjoyed a successful career apart from Astaire in many solo outings. She won a Best Actress Oscar in 1941 for her part in Kitty Foyle (1940), and was nominated for a Golden Globe in 1953 for Monkey Business (1952 - she lost to Susan Hayward).

Inevitably with somebody known predominantly for dancing and glamour, as the years ticked by it became harder for Ginger to find the roles that suited her. As the 1950s wore on, when she was in her forties, the hits became scarcer, although she was still proving a successful name in films such as Storm Warning (1950), Monkey Business (1952), Black Widow (1954) and Tight Spot (1955).

As was the case for so many stars of her calibre and era, the meteoric rise of television in the late 1950s proved an attractive alternative, and Ginger made appearances on series such as Producers' Showcase: Tonight at 8.30 (1954), The Milton Berle Show (1959) and The Steve Allen Plymouth Show (1960).

The 1960s were not a productive time for Ginger on screen, although she did enjoy big success on Broadway in 1965 playing Dolly Levi in Hello, Dolly! Film appearances did crop up, however - she played bordello owner Madame Rinaldi opposite Ray Milland in Quick, Let's Get Married! (1964), and Mama Jean Bello in 1965's Harlow, her final film, a loose biopic of tragic Hollywood starlet Jean Harlow. Ginger only had a couple of weeks to rehearse this role as she was a last-minute replacement for Judy Garland. The film was shot in something called Electronvision, which made the picture look dark and grainy. Ginger played Jean Harlow's infamously pushy mother who dreamed of fame herself, but saw it realised in her tragic daughter.

But the film roles were few and far between an ever-proliferating list of TV appearances - Vacation Playhouse (1963), The Red Skelton Hour (three times 1963-64), a TV special of Cinderella, and a guest spot on Lucille Ball's Here's Lucy (1971). The 1970s were sparse for Ginger, but she continued to do well on the live stage - in 1969 she visited the UK to play in the West End production of Mame, and became the highest paid West End performer in history up to that time. She even gave a Royal Command Performance for the Queen.

Her final screen appearances were all on TV. In November 1979, aged 68, she appeared in The Love Boat as Stella Logan, a showbiz legend trying to shake off the continued attentions of her playwright ex-fiance, played by Douglas Fairbanks Jr. She also put in a camp performance of Captain and Tennille's Love Will Keep Us Together. In a September 1984 episode of Glitter - a series about a showbiz magazine and its staff - Ginger played herself alongside Cyd Charisse, while her last ever acting role was aged 76 in Aaron Spelling's Hotel, on October 3rd, 1987, in which she played psychic medium Natalie Trent. In 1985, at the age of 74, Ginger fulfilled a lifelong ambition to direct when she helmed an off-Broadway production of Babes in Arms.

However, with acting laid to rest, Ginger did not become a stranger to the cameras, taking part in various interviews and documentaries about Hollywood history. In November 1991 she was interviewed on UK chat shows Wogan and Pebble Mill, while also taking part in Ann Miller's This is Your Life in April 1993, Bob Hope: The First 90 Years (May 1993) and finally, That's Entertainment III: Behind the Screen, a made-for-video documentary released in a box set of the previous two That's Entertainment compilation films in 1994.

Ginger's last public appearance was on Saturday, March 18th, 1995 when she received the Women's International Center Living Legacy Award. Ironically, within five weeks, she'd be dead. Her latter years were plagued with immobility as she suffered two strokes, the first in 1990, which confined her to a wheelchair and left her partially paralysed. However, as a lifelong Christian Scientist she did not allow doctors to treat her, believing that healing would come through the power of prayer - not once did she visit a hospital for after-care following the strokes. Her prayers might have prolonged her life, but she finally succumbed on April 25th, 1995, when she suffered a heart attack at the age of 83. She was cremated and her ashes interred at the Oakwood Memorial Park Cemetery in Chatsworth, California, alongside her beloved mother's remains.

And to end on... Ginger was interviewed by Selina Scott sitting in for Terry Wogan on his BBC chat show on November 15th, 1991. Here, Ginger is 80 and obviously affected by the strokes she'd recently suffered: she has gained weight, does not walk on set as most guests did, and her voice is noticeably weaker and raspier. However, the fire still burns inside as she talks about dating Fred Astaire, and looking back over old memories for her autobiography.