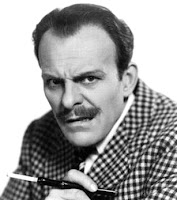 Best known for: English comedian and character actor whose gap-toothed grin and upper-crust cad persona made him a popular staple of British films in the 1950s and 60s, such as School for Scoundrels (1960) and Those Magnificent Men in Their Flying Machines (1965). He was nominated for a Best Actor BAFTA in 1959 for his role in the previous year's Tom Thumb (losing to Trevor Howard) and was nominated for a Golden Globe for his role in The Mouse on the Moon (losing to Alberto Sordi).

Terry-Thomas's film and TV career was going great guns in his fifties, but it wasn't until the dawn of the 1970s, as he entered his sixth decade, that fate would play a cruel hand. It was 1971, and Terry was 60 years old. He was appearing in the play Don't Just Lie There, Say Something! at the Metro Theatre in Sydney, Australia, went he felt unwell and paid a visit to a doctor, who noticed his patient's left hand was trembling slightly. The doctor recommended a visit to his GP when he got back to the UK, which he did, and was referred to a specialist, who diagnosed Parkinson's Disease. Terry did not make this diagnosis public for fear of losing work, but after a while it was difficult to disguise the fact something was wrong: he developed a shuffling gait and stooped posture, began trembling, and his speech began to suffer. Eventually he decided to make known his diagnosis so as to avoid accusations of being drunk on set.

His career was not too badly affected by the Parkinson's at first. He made an appearance in the 1972 film Dr Phibes Rises Again, a sequel to the original 1971 film, and also took roles in the Amicus horror film The Vault of Horror (1973), The Cherry Picker (1974) and Side By Side (1975). Terry also took what is one of his most memorable roles in 1975, voicing the snake Sir Hiss in Disney's animation of Robin Hood. Sir Hiss even sported gap teeth like Terry!

As the 1970s drew to a close, Terry's roles became increasingly briefer, more like cameos than proper performances, playing Mr Square in The Bawdy Adventures of Tom Jones (1976), the Governor in The Last Remake of Beau Geste (1977) and Dr Mortimer in a version of The Hound of the Baskervilles (1978) starring Peter Cook as Sherlock Holmes and Dudley Moore as Dr Watson.

Terry's final acting role was in Happy Birthday, Harry, an Italian sex comedy released in 1980 which was never released on English-speaking shores, and has been described as the Italian version of that lamentable farce Carry On Emmannuelle. A sorry swansong for a prolific and much-loved talent.

Terry did also make personal appearances on TV post-diagnosis, including two interviews on the chat show Parkinson (June 1971 and October 1974), Dinah's Place (March 1974), and Saturday Night at the Mill (March 1976). He even turned his hand to presenting the Circus World Championships in February 1981! He also made a handful of TV commercials, including Birds Eye fish fingers (1979), the Ford Motor Company (1980), and Benson & Hedges cigarettes (1973).

By 1977, Terry's bodily movements were becoming very obvious, his voice became softer and his posture contorted. The next two years were spent undergoing a series of medical treatments and examinations, but by 1979 the condition was so debilitating that he had to turn down work, such as that offered by Derek Jarman in his film The Tempest.

In June 1982 Terry appeared on the BBC science series The Human Brain to discuss and highlight Parkinson's Disease, and his appearance led directly to £32,000 being donated to the Parkinson's Disease Society. But behind closed doors, affairs were not going well. Terry's medical bills were spiralling out of control - he and his wife Belinda were living in Spain, and had to sell their London flat and cottage, and by 1983 his bills amounted to £40,000 a year.

In 1984 Terry had sunk into a depression. Interviewed, he revealed that doctors had said he would live another four or five years, to which he replied: "God forbid! I shall probably blow my brains out first." By 1987 Terry could no longer afford to live in Spain, and so he and Belinda returned to London and lived in a series of rented properties before ending up in a three-room, unfurnished charity flat, with financial assistance from the Actors' Benevolent Fund. Comedy actor Richard Briers visited Terry in this flat, later reporting: "Sitting there, motionless, he was just a mere shadow. A crippled, crushed, shadow. It was really bloody awful."

On April 9th, 1989, the comedy actor Jack Douglas and broadcaster Richard Hope-Hawkins organised a charity fundraising ball at the Theatre Royal, Drury Lane, for Terry after learning he was living in obscurity and near-poverty. The five-hour gala featured many top performers, with Phil Collins as the top billing, and Michael Caine as the host. It raised more than £75,000 for both Terry and Parkinson's UK. Hope-Hawkins also made a short film for Thames Television showing Terry and Belinda's predicament - the footage is not easy to watch, as Terry is reduced to a silent, immovable shell by his condition - so different from the jolly bounder image everybody knew and loved him for.

The financial boost allowed Terry to move out of his charity flat and into Busbridge Hall nursing home in Surrey, where he died on January 8th, 1990, aged 78. His funeral was held at St John the Baptist Church in Busbridge, Goldalming, where the theme from Those Magnificent Men in Their Flying Machines was played. He was cremated at Guildford crematorium.

Here's the full Thames TV film with Terry and Belinda made in April 1989, nine months before he died. Be warned: it can make depressing and upsetting viewing...

Posted by My Old School Books at 5:21 pm

Email ThisBlogThis!Share to TwitterShare to FacebookShare to Pinterest
Labels: Terry-Thomas