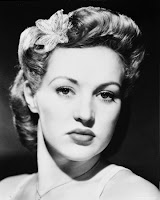 Best known for: Actress, dancer and singer who enjoyed great success in the war years and the 1950s with a string of Technicolor musicals, becoming the number one box office draw of 1943. For all her fame and success, however, she wasn't once nominated for an Oscar, Golden Globe or Emmy. Her famous legs, however, were insured with Lloyds of London for $1m.

The year 1952 was the turning point in Betty's career. Until that point, she'd enjoyed hit after hit and was one of the most popular and highest paid entertainers on the planet. But in 1952, at the age of 35, her contract with 20th Century Fox came up for renewal and Betty asked for more money and more say in the type of films she starred in. The studio refused and Betty went out on strike, and was replaced in the film Gentlemen Prefer Blondes by a certain Marilyn Monroe. In late 1952 Betty failed to turn up for work to film the musical comedy The Girl Next Door, and she was promptly suspended by Fox. Incidentally, Betty was replaced in this film by June Haver, but The Girl Next Door became her last movie, and she quit Hollywood to join a convent!

It was six months before Betty made another film after reconciling with Fox. That film was the musical The Farmer Takes a Wife (1953), which was followed by the box office smash How to Marry a Millionaire (1953), co-starring Monroe and Lauren Bacall. But the rocky relationship Betty had with Fox reared up again when the star refused to appear in their next musical comedy, There's No Business Like Show Business (1954). Betty was again suspended from her contract and replaced in the film by Ethel Merman.

Fox threatened to sue Betty, so she agreed to appear in two more films for them - Three for the Show and How to Be Very, Very Popular (both 1955). Betty only agreed to do the latter as long as It Girl Marilyn Monroe was her co-star, but Marilyn pulled out and was replaced by Sheree North. The film was a flop and critics bemoaned the lack of chemistry between Grable and North.

That was the straw that broke the camel's back and - apart from showing interest in playing Miss Adelaide in the 1955 musical Guys and Dolls - How to Be Very, Very Popular proved to be her final film appearance. She announced her retirement from Hollywood, and saw out the rest of the decade with a handful of TV appearances.

On March 9th, 1956 she played the title character in the Star Stage installment Cleopatra Collins, in which a former Miss America celebrates her birthday with a party to which all of her ex-boyfriends are invited. Her current husband is unhappy with the competition he faces.

Betty's last ever screen role was actually playing herself in Shower of Stars, broadcast April 17th, 1958, which saw Jack Benny show the audience what goes in to putting a TV show together, which included tricking the cast into working for half the salary.

She may have called time on acting on the screen, but Betty certainly wasn't shy in making personal appearances on American TV in the 1960s - she clocked up appearances on everything from The George Burns Show (1960) to The Andy Williams Show (1962), from What's My Line? (1965 and 1967) to The Carol Burnett Show (1968). She even appeared in a series of TV commercials for Playtex Shorties, showing off her famous legs.

On April 10th, 1972 she joined old colleague Dick Haymes to present the Best Musical Score Oscar in Los Angeles, and received a standing ovation. Lifelong smoker Betty felt ill after the ceremony and after consulting doctors, was diagnosed with lung cancer. Because she had no health insurance, she needed to carry on working to pay for her medical fees. She had several treatments in St John's Hospital in Santa Monica, and wore a wig in her final months to cover her loss of hair.

Betty's friend Michael Levitt went to see Betty just before she died. He said: "I went over there and up to her room, and [Betty's partner Bob Remick] came out and said: 'I just want you to know that she doesn't look quite like she did last time you saw her'. And when I went into her room, I saw this little person lying there and it was not Betty any more. I went over to her bed. Her daughters, Vickie and Jessie, were there, and her sister Marjorie, and Bob. As I bent over the bed, she just brightened up. Marjorie said: 'Look who's here. Mikey's here'. And Betty just put her hand out and said: 'Mikey', and within ten minutes or so, it was all over."

Betty succumbed to the disease on July 2nd, 1973, at 5.15pm, at the age of 56. She was a little short of achieving her final wish - being able to celebrate the Fourth of July (Independence Day). Her funeral was held on July 4th at the All Saints Episcopal Church in Beverly Hills, attended by Hollywood stars such as Dorothy Lamour, Cesar Romero and George Raft. The church organ played I Had the Craziest Dream from her 1942 film Springtime in the Rockies. Her ashes were entombed at Inglewood Park cemetery in California.


Despite being one of the highest paid Hollywood stars of the 1940s and 50s, Betty died with serious debts (thanks in large part to her catastrophic marriage to alcoholic and gambler Harry James) and her Nevada home was sold to the nearby Tropicana Hotel at auction. When her safety deposit box was opened, her daughter Jessie found a handwritten note saying: "Sorry, there's nothing more."

A bit of fun... Here's some rare footage of Betty Grable in her 1960 Las Vegas show, when she was 44 years old and had left Hollywood far behind.

Posted by My Old School Books at 2:23 pm