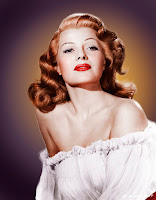 Best known for: Beautiful actress and dancer who was at her height in the 1940s with films such as Cover Girl (1944), Gilda (1946) and Salome (1953). She was never nominated for an Oscar, but was nominated for a Golden Globe for her performance in Circus World (1964 - she lost to Anne Bancroft). She was married five times, including to actor and director Orson Welles, Argentinean actor and singer Dick Haymes, socialite Prince Aly Khan, and producer James Hill.


Rita found it difficult to find true love, which is why she had so many marriages, all of which were doomed to some extent or another. After almost 30 years of starring in films and receiving critical and popular acclaim for doing so, it was her fourth marriage to Dick Haymes which began to unravel the career she had forged for herself.

One day in 1955, the unpredictable Haymes struck Rita in the face in public at the Cocoanut Grove nightclub in Los Angeles. Rita walked out and left, never to return to him, although she was severely shaken by the incident and doctors ordered rest for several days. By this point Rita hadn't appeared in a film since 1953's Miss Sadie Thompson, and wouldn't have another film role until 1957's Fire Down Below. Her tumultuous marriage and private life - which involved everything from her husband's Inland Revenue debts to a custody and alimony battle with her ex-husband, Aly Khan - were taking a toll on her career.

Over the next few years she starred in a string of films which kept the money flowing - the Frank Sinatra musical Pal Joey (1957) was her final project for Columbia Pictures, after which she appeared in Separate Tables (1958), They Came to Cordura (1959), The Story on Page One (1959) and The Happy Thieves (1961), all to decent acclaim.

By the 1960s her output was slowing, however. By 1961 she had been into, through and out the other side of her fifth and final marriage to film producer James Hill, who did not treat Rita any better than many of her previous partners. Charlton Heston told of one evening at dinner with his wife Lydia, Rita and James Hill when Rita was reduced to floods of tears by a tirade of "obscene abuse" from her husband. Heston said he was witness to a "marital massacre" and was tempted to hit Hill, but instead left the dinner table with Lydia. "I'm ashamed of walking away from Miss Hayworth's humiliation. I never saw her again," he said.

Between 1964 and 1972 Rita made eight films, including The Money Trap (1965) with her old friend Glenn Ford, and the Italian production The Rover (1967), co-starring Anthony Quinn. But as Rita reached her sixth decade, the roles got weaker and the quality of the films began to drop. By the time of The Naked Zoo (released in September 1970, when Rita was 51), things weren't looking great. It was a cheaply-made B-movie shot in South Florida involving blackmail and murder and was not an appropriate vehicle for a star of Rita's standing. One reviewer said of the film: "Hayworth's once bright star sank deep when she appeared in this sordid crime drama."

Rita's final two acting performances were equally as inauspicious. In February 1971 she appeared in Road to Salina, co-starring Robert Walker Jr and Ed Begley, which had an uncomfortable subplot involving incest and murder. Rita's final acting appearance was in November 1972's Western The Wrath of God, playing Senora De La Plata, but only secured the role thanks to a favour from co-star Robert Mitchum. By this point Rita was in ever-spiralling debt due to the various disastrous marriages in her wake, and was also drinking heavily. She was forgetting her lines and being temperamental on set, and her scenes had to be shot one line at a time.

Rita was desperate to retire, but had to carry on due to her financial woes. In November 1972 she began filming Tales That Witness Madness, a portmanteau horror film shot in the UK, but because of her deteriorating mental condition, she left the set, returned to the United States and left acting for good. Rita was replaced by Kim Novak, who broke a four-year acting hiatus to fill the role.

Little did anybody know that it wasn't the drink that was causing Rita's unpredictable behaviour, but what was later understood to be early onset Alzheimer's Disease. By this point Rita was just 54, but life did not make it easy for her - alcohol was her automatic respite when both of her brothers died within a week of each other in March 1974, and in January 1976 she was removed from a TWA flight at London's Heathrow Airport after having an "angry outburst".


These outbursts were a hallmark of her later life and career, and most people put them down to alcoholism, but finally, in 1980, at the age of 62, Rita was diagnosed with Alzheimer's by New York psychiatrist Ronald Fieve. But as her daughter Yasmin said: "There had been two decades of hell before that." The disease had been discovered by Alois Alzheimer back in 1906, but until the 1980s, when Rita became the first public face of the condition, it had largely been forgotten. It was only through Rita's diagnosis that it became known that the disease did not only affect the elderly.

In July 1981 Rita's mental health had deteriorated to such an extent that a Los Angeles Superior Court ruled that she should be placed in the care of her daughter, Princess Yasmin Aga Khan. In her final years, Rita lived in an apartment at The San Remo on Central Park West and took up oil painting; Yasmin lived next door in an adjoining apartment and organised her care. In 2009, Yasmin spoke about her mother's passion for painting during her illness in the documentary I Remember Better When I Paint, which also shows some of the paintings Rita created.

Those who saw Rita in the 1980s say her mental condition was severe. When ex-husband Orson Welles saw her at an event the Reagans held for Frank Sinatra, he said he was speaking to her for around five minutes before he noticed her finally remember who he was, and begin to cry. In 1983, Orson and Rita's daughter Rebecca visited her mother for the first time in seven years, but said her mother barely recognised who she was.

Rita's nephew Richard Cansino said: "It's upsetting that we all thought that she was drinking and we attributed all of her behaviour to her being an alcoholic. I feel guilty I perceived it that way."

In February 1987, at the age of 68, Rita lapsed into a semi-coma, and finally died from complications associated with Alzheimer's Disease on May 14th. A funeral was held five days later at the Church of the Good Shepherd in Beverly Hills; pallbearers included Ricardo Montalban, Glenn Ford, Don Ameche and Hermes Pan. Rita was interred at Culver City's Holy Cross Cemetery.

Yasmin Aga Khan has dedicated much of her life to raising awareness of Alzheimer's Disease since her mother's death, getting heavily involved in the Alzheimer's and Related Disorders Association (ARDA), Alzheimer Disease International (ADI), and the Salk Institute for Biological Studies (SIBS).


Here's some rare footage of Rita Hayworth on a visit to Buenos Aires in 1976. She is obviously a little vague and confused during the interview, talking about a film she was going to shoot in Canada in three months which ultimately never happened. However, she's just as beautiful and radiant as she ever was...