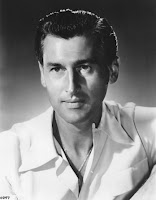 North to Alaska was actually the last Hollywood film Stewart made, having turned down a role in 1959's Ben-Hur as he refused to take second billing to Charlton Heston. The 1960s was taken up with productions in Europe, principally Germany, where he took on the role of Old Surehand in three adaptations of Karl May's Western novels - Amongst Vultures aka Frontier Hellcat (1964), The Oil Prince aka Rampage at Apache Wells (1965) and Old Surehand aka Flaming Frontier (1965). Further 1960s work included the Italian production Requiem for a Secret Agent (1966), the British/ German co-production The Trygon Factor (1966) and the British/ American co-production The Last Safari (1967).

It wasn't until February 1969 that Stewart finally caught up with many other of his contemporaries and dabbled in the world of television, playing adulterous photographer Paul Dennison in the one-off drama Any Second Now. However, this TV movie led to Stewart being cast as the regular character of Colonel Alan MacKenzie, the latest owner of the Shiloh ranch, in the Western series The Virginian. Stewart debuted in September 1970 and appeared in 11 episodes until the end of the season in March 1971, after which the series was axed. Stewart might have been glad of that, as he was not enjoying the role - he admitted he joined up for the money but was disappointed with the lack of character development.

In 1972 a 58-year-old Stewart was cast as Sherlock Holmes in a TV adaptation of The Hound of the Baskervilles, with Bernard Fox as his Watson. It also starred William Shatner, Sally Ann Howes and John Williams, but the venture was poorly received. After this, Stewart decided to go into semi-retirement and moved to southern Spain where he invested in real estate in Estepona, Malaga.

The rest of Stewart's sporadic career was taken up mostly with TV appearances, although there were the odd big screen roles: he played unscrupulous banker Sir Edward Matherson in The Wild Geese (1978); in Hell Hunters (1986) he played a Nazi war criminal who develops a spider serum which turns people into fascist zombies; and 1989's Fine Gold, a lamentable Spanish production about two warring wine-making dynasties in which one character dreams "of the perfect white wine".

In 1980 Stewart was diagnosed with lung cancer, and was told by doctors that he had only three more months to live. He later said: "I was 67 and had smoked 60 cigarettes a day for 40 years, but the doctor said if I had an operation there might be a chance of two to four more years of life. So I said, 'Who the hell needs that, but you better give me three months to put my house in order'." He had the operation and had both a lung and a rib removed - but was shocked to later be told he didn't have cancer at all, only tuberculosis!

This turn of events reinvigorated Stewart's passion for acting, and as well as releasing his autobiography Sparks Fly Upwards, he became a regular face on American TV series, as well as in the German soap opera The Guldenburg Heritage (1987). He moved back to California and popped up in a 1982 TV movie playing Prince Philip (husband of Queen Elizabeth II) in The Royal Romance of Charles and Diana; there were guest roles in The Fall Guy (1983), Murder, She Wrote (1985), The Love Boat (1985), The Wizard (1987) and Hotel (twice, in 1983 and 1987). There were also the ubiquitous TV movies, including A Hazard of Hearts (1987) and Chameleons (1989).

Stewart's final acting role was in the pretty much forgotten ABC crime series Pros and Cons, which was an extension of the 1990 series Gabriel's Fire, featuring James Earl Jones as detective Gabriel Bird. Stewart appeared in the October 10th, 1991 edition entitled It's the Pictures That Got Small, co-starring June Allyson.

Stewart's final personal screen appearances included being interviewed on UK chat show Aspel and Company in March 1988, aged 74, and finally taking part in the documentary The Tales of Helpmann (1990), about the life and work of ballet dancer and actor (and Child Catcher!) Robert Helpmann. He did enjoy late success on the stage, however, appearing alongside Rex Harrison and Glynis Johns in W Somerset Maugham's The Circle, firstly in North Carolina, then Baltimore and Boston, before debuting on Broadway in November 1989.

Stewart - who often claimed he didn't rate anything he'd done in his career - died of bone and prostate cancer on August 16th, 1993, aged 80.

A bit of fun... In 1986 (and it is 1986, despite the title's claim of 1987), Stewart appeared on the British chat show Wogan where he regaled the audience about the time he was filming 1952's Scaramouche and got a sword in his mouth, as well as his plans to sue the author of a book about Richard Burton which he says libels him (it may have had something to do with the claim that Burton made love to his wife Jean Simmons during a visit to their Beverly Hills home in the 1950s)! It's obvious from this interview that Stewart could be an abrasive personality who doubtless did not suffer fools gladly!

Posted by My Old School Books at 2:37 pm