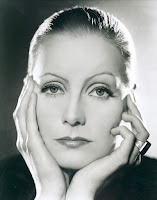 Best known for: One of the most successful and enigmatic stars ever to grace the Hollywood screens, both in the silent and the early talkies periods, Greta's star burnt brightly until she turned her back on fame and retired into seclusion for the final 50 years of her life. She was nominated for four Best Actress Oscars (two in the same year for different films!), but never won one, losing out to Norma Shearer, Luise Rainer and Vivien Leigh. She was, however, awarded an honorary Oscar in 1955, but Greta did not attend the ceremony to receive it (Nancy Kelly picked it up on her behalf).

Garbo was one of those actresses who did not want to age on screen or in the public's eye. Her stardom and her impact on Hollywood would be forever maintained by her decision to retire from the industry in 1941, aged just 36 and after having appeared in fewer than 30 movies over 21 years. So how did this come about?

Well, Garbo's penultimate film was the huge box office hit Ninotchka (1939), for which she was nominated for an Oscar. It was the fourth time she'd been put up for a Best Actress award for one of her films, but yet again she didn't win, principally because Ninotchka had the misfortune to be up against the steamrollering might that was Gone with the Wind. Vivien Leigh won the Oscar.

Ninotchka was Garbo's first comedy, and it had been such a huge success that MGM decided to capitalise on that by making her next film a romantic comedy. That film was Two-Faced Woman, directed by George Cukor and released in November 1941, and saw Garbo playing a ski instructor who masquerades as her own twin sister in an attempt to ruin her estranged husband's new romance. The film made $1.8m at the North American box office, but still resulted in a $62,000 loss. However, the film was a critical failure, and even Garbo referred to it as "my grave".

Garbo was embarrassed by the poor reviews, but her automatic reaction was not to retire. It was the onset of World War Two in Europe which scuppered her next step. She had hoped to make The Girl from Leningrad, but funding was lacking, so decided to wait out the war and return to the screen after it was all over and backing from Europe (where so much of her fan base and success grew from) could be secured. Although Garbo was also concerned about her age - "Time leaves traces on our small faces and bodies. It's not the same any more, being able to pull it off" - but forged ahead and signed a a contract in 1948 to appear in a film based on Balzac's La Duchesse de Langeais. Garbo conducted screen tests on May 25th, 1949, and flew to Rome in the summer to begin shooting, but at the last moment, the funding fell through and the project was abandoned. It's one of the greatest What Might Have Beens in Hollywood history - those screen tests were the last time Greta Garbo stepped in front of a movie camera. She was 43 years old.

But that didn't stop the offers coming in: she was the original choice to play Norma Desmond in Sunset Boulevard (1950), for instance, and was also courted for a small part in a 1969 adaptation of Proust's Remembrance of Things Past. She never gave a proper explanation for her decision to turn her back on Hollywood, although in 1986 she did tell one journalist: "I was tired of Hollywood. I did not like my work. There were many days where I had to force myself to go to the studio. I really wanted to live another life."

And so Garbo became a recluse, although not a hermit. She had friends, and she travelled with them; she just didn't want the attention from the public and media any longer. But in her retirement, Garbo was restless, unfocussed and prone to depression. In 1971 she told a friend she suffered from "very deep" depression. There have been suggestions that perhaps Greta was bipolar, as she used to swing from great happiness to joylessness frequently.

In retirement, Greta collected art, and walked with friends around her new adopted home of New York City. In 1953 she bought an apartment at 450 East 52nd Street in Manhattan, and lived there for the rest of her days. On November 13th, 1963, Greta was a guest of President John F Kennedy at the White House, and later spoke of it as "a magical evening".

In 1971 Greta took a holiday in France with her friend Baroness Cecile de Rothschild, who in turn introduced Garbo to New York art collector Samuel Adams Green. Garbo and Green forged a close bond and the two became common walking partners around the streets and parks of Manhattan. Green, with Garbo's permission, often recorded their conversations together, but in 1985, when Greta discovered Green had been playing the tapes to his friends, she cut off relations with him.

In the 1970s and 80s, the sport of "Garbo-watching" became quite common in Manhattan as residents, tourists and the media tried to photograph her while out walking, which she did every day. As a result, despite the common belief being that she was rarely photographed in her later years, there are actually lots of pictures of her out and about - both in the US and abroad, often at airports. Garbo aged gracefully, but age was not what she wanted the public see her do.

In 1984, at the age of 79, Greta was successfully treated for breast cancer, and towards the very end of her life was receiving dialysis treatment for six hours three times a week at the Rogosin Institute at New York Hospital. Greta Garbo died on April 15th, 1990, aged 84, in hospital as a result of pneumonia and kidney failure. She also suffered from gastrointestinal and periodontal ailments. She was cremated in Manhattan and her ashes interred at Skogskyrkogarden cemetery near Stockholm nine years later. Greta was a rich woman when she died, leaving $32m in her will to her niece, Gray Reisfield.

A bit of fun... In May 1949 Greta conducted screen tests for La Duchesse de Langeais, what was to be her "comeback" film but which ultimately never happened. The footage was thought to have been lost, until it was unearthed by film historians in 1990, the year she died. At the age of 43, Greta still looked ravishing!

Posted by My Old School Books at 1:34 pm