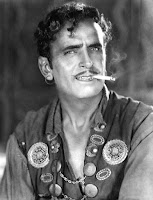 Best known for: One of the earliest action heroes, a swashbuckling star of the silent era who also branched into writing and producing. He was also one of four Hollywood luminaries - along with Charlie Chaplin, Mary Pickford (his second wife) and director D W Griffith - who set up United Artists in 1919, giving performers greater control over their careers. He was awarded an honorary Oscar in 1940, following his death.

Douglas's last few years weren't as prolific as he had been in the 1910s and 20s, at the height of his swashbuckling fame, but he still churned out blockbusters such as The Black Pirate (1926), The Gaucho (1927) and The Iron Mask (1929). In his final decade, into his fifties, his output slowed down, with only three major film roles in the 1930s, partly because he was disillusioned with the onset of sound films, and partly due to his chain-smoking affecting his athleticism.

First up was Reaching for the Moon (1930), co-starring Bebe Daniels, which proved a departure from his recent output in that it was a return to his comedy roots. Fairbanks played Wall Street bigwig Larry Day who is mentored in the ways of romancing by his valet, played by Edward Everett Horton. This film is notable also for featuring the earliest existing recording of a Bing Crosby performance.

August 1932's Mr Robinson Crusoe was a mix of Fairbanks's two best genres, adventure and comedy. As Steve Drexel, he takes up the challenge of swimming to a remote south-seas island and being able to thrive there with nothing but a toothbrush. His female foil here was Maria Alba, who Drexel christens Saturday. Fairbanks weeded out as much dialogue from the film as he could, demonstrating his dislike of the new-fangled talkies, and the production - shot in Tahiti - played to his strengths.


Douglas's final film role was the title character in The Private Life of Don Juan (November 1934), in which he played an ageing Don Juan in a witty reflection of his own predicament. Douglas was a star known for his action adventure roles, but at the age of 51, the years were beginning to catch up.

He did make one final silver screen appearance - albeit uncredited - in October 1937's Ali Baba Goes to Town, an Eddie Cantor vehicle about the making of a film adaptation of Arabian Nights. A number of star names appear in scenes set at the fictional film's premiere, including Tyrone Power, Cesar Romero and Shirley Temple.

Douglas's final years were spent out of the limelight. His enthusiasm for film-making had waned, his popularity had suffered with the rise of sound films, and he preferred to spend time with his third wife, Sylvia, Lady Ashley, either at their home in Santa Monica or on holiday abroad.

On December 12th, 1939, Douglas suffered a mild heart attack, and he died later that day at his home. His last words were: "I've never felt better." His funeral service was held at the Wee Kirk o' the Heather Church in Glendale's Forest Lawn Memorial Park Cemetery, where his remains were placed in a crypt in the Great Mausoleum. In 1941 he was removed from the crypt by his widow and an elaborate marble monument to him was built in the grounds of Los Angeles's Hollywood Forever Cemetery. The monument was dedicated in a ceremony in October that year, with Douglas's close friend Charlie Chaplin conducting a reading. This monument is where the remains of his son, Douglas Fairbanks Jr, were interred upon his death in 2000.

Posted by My Old School Books at 3:32 pm