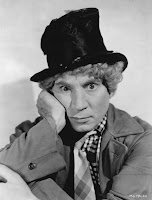 This is one of a blog grouping for the Marx Brothers: see also Chico, Groucho, Gummo and Zeppo.

Best known for: One of the main trio of the Marx Brothers comedy act which had huge success in the movies in the 1930s and 40s, alongside Harpo and Chico. His comedy style was influenced by pantomime, slapstick and mime, and he frequently played a harp in most of his films.

After the final official Marx Brothers film, Love Happy, in 1949, Harpo's solo career was largely reduced to cameos and television appearances. The Harpo persona was predominantly mute, so his solo career was rather limited by how creative he could be. However, there was one time when he narrated a DuPont Show of the Month entitled The Red Mill, broadcast on April 19th, 1958 - albeit through the medium of a harp (he was helped vocally by co-narrator Evelyn Rudie).

Another mute outing was in the General Electric Theater's The Incredible Jewel Robbery (March 8th, 1959), which he agreed to appear in for the sake of co-star Chico Marx, who needed the money to pay off his gambling debts. For Christmas 1960, Harpo appeared as Benson in another DuPont Show, Silent Panic, in which he played a deaf-mute who, as a mechanical man in a department store window, witnesses a gangland murder. It's a great mime performance from Harpo, despite some unintentionally creepy make-up!


Harpo's final two screen appearances would both come in 1962. First of all there was a Red Skelton Hour production entitled Somebody Up There Should Stay There, broadcast on September 25th, 1962, almost exactly two years before he would pass away. Harpo played a Guardian Angel. Finally, on October 20th, 1962, Harpo appeared as himself in the TV series Mr Smith Goes to Washington, starring Fess Parker, in the episode Musicale.

Wikipedia claims Harpo's final public appearance took place on January 19th, 1963, when he was aged 74, but fails to mention where (further research on Harpo's Place reveals that it may have been Pasadena, California). It claims Harpo was in the company of singer and comedian Allan Sherman, and was there to announce his retirement from the entertainment business.

Harpo's very last professional work was, true to form, playing the harp on Mahalia Jackson's album Let's Pray Together, released 1964, as well as a live appearance at the Palm Springs Police Charity Ball just weeks before he died.

On Sunday, September 27th, 1964, he underwent open heart surgery in a West Los Angeles hospital. Sadly, he died, aged 75, the following day of a heart attack - it was he and his wife Susan's 28th wedding anniversary.

It was the funeral of Adolph (latterly Arthur) Marx that Groucho Marx's son Arthur claimed was the only time he ever saw his father cry. Harpo instructed in his will that his trademark harp be donated to the State of Israel. His remains were cremated and scattered over the seventh hole of the Rancho Mirage golf course in California, where he used to play the game every month.

Posted by My Old School Books at 7:28 pm