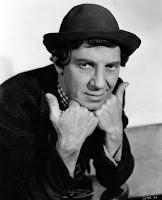 This is one of a blog grouping for the Marx Brothers: see also Groucho, Harpo, Gummo and Zeppo.

Best known for: One of the main trio of the Marx Brothers comedy act which had huge success in the movies in the 1930s and 40s, alongside Harpo and Groucho. He played an important role in the management and development of the Marx Brothers act, particularly in their early years.

The final film to feature the Marx Brothers as a cohesive act was 1949's Love Happy, which was produced by former silent film star Mary Pickford and also featured a walk-on from a certain Marilyn Monroe. The film was originally supposed to be a vehicle for just Harpo Marx, but Chico was added to the mix in order to try and pay off his gambling debts - the filmmakers then insisted on it being a full-blown Marx Brothers movie, so Groucho appeared too, albeit in a reduced role to usual (the three are never actually in the same shot together).

After Love Happy, Chico took a running role as Chico Ravelli in the variety series The College Bowl (1950-51), in which he runs a soda shop near a college campus, and the students come in to hang out and sing. It was a quaint series which ran for 26 episodes and was Chico's only solo TV series.

One of Chico's final appearances was in The Story of Mankind, an Irwin Allen production with an impressive roll call of names including Peter Lorre, Virginia Mayo, Hedy Lamarr, Agnes Moorehead, Vincent Price, Dennis Hopper as well as Harpo and Groucho. Chico played a monk in a short section in which Christopher Columbus (played by Anthony Dexter) debates whether the world is flat or round. The Story of Mankind, released on November 8th, 1957, marked the final time all three Marx Brothers appeared in the same film, albeit not together.

On February 13th, 1958, at the age of 70, Chico appeared in the Playhouse 90 drama No Time at All, which also starred former silent comedy star Buster Keaton. Chico's final acting appearance was in The General Electric Theater's The Incredible Jewel Robbery in March 1959, which also featured Harpo. Chico plays policeman Harry who arrests criminal Harpo in a largely dialogue-free comedy outing.

Chico's last ever screen appearance was fittingly in Championship Bridge in October 1960, being himself rather than the comedy persona. Footage of it can be tracked down on YouTube, albeit very poor quality. He was partnered with Ivan Erdos against John Gerber and Edith Kemp, but Chico and Ivan lost abominably. This appearance on ABC TV took place a year to the week before Chico passed away.

Chico died of arteriosclerosis, aged 74, at his Hollywood home and was entombed in a crypt at Forest Lawn Memorial Park Cemetery in Glendale, California. Chico was the eldest Marx Brother, and the first to die. Gummo, who died in 1977, was put in a crypt across the hall from Chico.

A bit of fun: Towards the end of the Marx Brothers' professional lives, Harpo didn't have to work if he didn't want to because he'd amassed a good amount of money from their fame, but he often agreed to take part in projects involving Chico so that his insolvent sibling could earn some money to pay back his debts. Here's an example of such a collaboration from 1956 - a sponsor's commercial for Prom Home Permanent.

Posted by My Old School Books at 3:19 pm