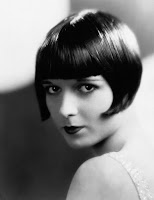 Best known for: Becoming one of Hollywood's earliest female screen goddesses, notably in the silent films Pandora's Box and Diary of a Lost Girl (both 1929), as well as popularising the bob hairstyle.

Louise is probably better remembered today for her publicity pictures and distinctive hairstyle than for her actual body of work, which itself wasn't extensive. She appeared in just 22 films between 1925 and 1938, after which she retired at the tender age of 32 - and not once did she act on screen again.

Louise's premature downward spiral came after she refused to stay with Paramount Pictures after completing 1928's Beggars of Life. Louise was not keen on the "Hollywood scene" and, after Paramount denied her a promised salary rise, she left for Europe to make films there. Those films were successful in their own right (Pandora's Box and Prix de Beaute (1930), for instance), but when she returned to the US in 1931 and refused to play ball with Paramount - who wanted her to conduct sound retakes of the silent film The Canary Murder Case - she was essentially blacklisted.

Between the years 1932-36 Louise did not appear in any films, and actually declared bankruptcy in February 1932, but made a return to the cinema screen with December 1936's Empty Saddles, playing Boots Boone. Louise's role in this film is essentially as the damsel in distress being rescued by star Buck Jones, but it seems she was desperate for work at this time. Having previously turned down a Buck Jones Western, Louise now decided that any work was better than nothing, as she told one reporter at the time: "I am delighted with my role in Empty Saddles. It gives me an opportunity to do something, not just stand around and look pretty. I wouldn't trade it for all the other roles I ever had because I am really acting now, not just being an ornament, and I feel that, at last, I am on the road toward getting some place in pictures."

That quote would turn out to be doomed, as Louise only appeared in one more film before she retired. That film was Overland Stage Raiders, but before that, she had two near-misses - in February 1937 she appeared uncredited as a chorus girl in the Cary Grant vehicle When You're in Love. Louise was originally cast in a supporting role, but after several arguments with Columbia Pictures boss Harry Cohn, she was fired and most of her scenes were cut from the film. Louise can be spotted doing a speciality turn as a ballet dancer in one of the musical numbers.

This was a shame as Louise had agreed to appear in the film on a chorus girl's wage but be featured prominently in publicity pictures to try and drum up interest in the film. In return, Columbia promised to give Louise a star role in another film. That film never happened.

Another false restart came with King of Gamblers in April 1937, a low-budget crime caper starring Buster Crabbe, Akim Tamiroff and Claire Trevor. According to Louise in a later interview, director Robert Florey "specialised in giving jobs to destitute and sufficiently grateful actresses", but she failed to make the final cut.

Louise's final bid for a comeback was the aforementioned Overland Stage Raiders, released in September 1938 in the ongoing Three Mesquiteers franchise, and starring John Wayne and Ray Corrigan. Louise was paid $300 to play Beth Hoyt, the romantic interest, but she sported longer hair which rendered her virtually unrecognisable from her bobbed heyday.

In 1940, Louise opened her own dance school, but this venture failed amid a scandal involving her business partner. Louise did, however, manage to write the booklet The Fundamentals of Good Ballroom Dancing during this period.

She then tried acting on the radio (in Ellery Queen and Aunt Jenny's Real Life Stories), as well as writing gossip columns. Her lowest ebb came when she got a job as a sales girl earning $40 a week at Saks Fifth Avenue in New York, followed by several years spent as a call-girl for a handful of wealthy businessmen. She also dabbled with sleeping pills around this time.

Louise's next attempt at making money was to write a film script based on her own life, entitled Naked on My Goat, which she worked on for several years before destroying the manuscript and throwing it in an incinerator.

In the 1950s there was a revival in interest in Louise's silent films, and film curator James Card discovered Louise living as a recluse in New York City. He persuaded her to move to Rochester in New York and helped her forge a successful second career as a film writer, using the pseudonym Lulu.

Louise made few public appearances, but was interviewed at length about her career in 1974, at the age of 68, by Richard Leacock for the documentary Lulu in Berlin, which wasn't actually released until 1984.

Louise Brooks died of a heart attack on August 8th, 1985, after suffering from arthritis and emphysema for many years. She was 78. She was buried in the Holy Sepulchre Cemetery in Rochester, New York. Beethoven's Ode to Joy was played at her funeral and passages from her book Lulu in Hollywood were read out.

Eight of Louise's silent films are lost or partially lost, the earliest complete example of her work being 1926's It's the Old Army Game, with W C Fields. In 1986 the BBC made a 55-minute documentary about the life and work of Louise Brooks, which can be seen in full here:

Posted by My Old School Books at 4:08 pm