This is one of a blog grouping for the Marx Brothers: see also Chico, Harpo, Zeppo and Gummo.

Best known for: One of the main trio of the Marx Brothers comedy act which had huge success in the movies in the 1930s and 40s, alongside Harpo and Chico. He also enjoyed a successful solo career, notably as the host of You Bet Your Life on TV and radio. He was given an honorary Oscar in 1974 in recognition of his "unequaled achievements" in motion picture comedy.

The 1950s was a decade of cameos and guest appearances as far as Groucho's acting career was concerned, although he was very prominent as the host of the game show You Bet Your Life (1950-61). Following attempts to break into the solo mainstream in vehicles such as Double Dynamite (1951) and A Girl in Every Port (1952), Groucho soon found himself becoming more of a novelty than a front row talent. He did share billing (but not screen time) with Chico and Harpo in The Story of Mankind (1957) and the General Electric Theater play The Incredible Jewel Robbery (1959), and also took solo roles in anthology series such as The Bell Telephone Hour's The Mikado. This was broadcast on April 29th, 1960 and Groucho played Ko-Ko, the Lord High Executioner in Gilbert and Sullivan's much-loved light opera. Here, Groucho leaves his trademark cigar off-stage, but retains his spectacles, and although his singing voice leaves a little to be desired, it's not he, but his daughter Melinda, who lets the side down with a rather limp portrayal of Peep-Bo.

On January 14th, 1962 Groucho took the role of John Graham in General Electric Theater's The Hold-Out, hosted by future American President Ronald Reagan. It was Groucho's only really serious dramatic part on TV, playing the concerned parent dealing with the engagement of his daughter. It's unusual to see Groucho acting so seriously, but it's a great record of what he could do with a straight role.

In 1968 Groucho took on his penultimate acting role, as Mob boss God, in Otto Preminger's Skidoo. It was universally panned by critics at the time, and is still viewed as one of the greatest bombs of all time. The film attempts to get down with the kids, and has been described variously as "a finely controlled mess" and "an endlessly fascinating aberration". Groucho, then aged 70, allegedly prepared for the LSD-themed film by taking a dose of it, and reportedly had a moving, largely pleasant experience.

Groucho's final acting appearance was actually uncredited, playing Mr Flywheel in the sitcom Julia, helmed by Diahann Carroll, in the December 3rd, 1968 episode entitled Farewell, My Friends, Hello. This cameo no doubt sprang out of Carroll and Marx appearing together at the 22nd Annual Tony Awards in April 1968 to present an award to, among others, British actress Patricia Routledge (of Keeping Up Appearances fame!).

Throughout the 1970s Groucho popped up on all manner of talk shows, from David Frost and Dick Cavett to Johnny Carson and Merv Griffin. His rapid-fire delivery and wisecracking anecdotes went down a storm. He also received an honorary Oscar - and a standing ovation - in April 1974, at the age of 83, for his contribution to motion picture comedy. Groucho was noticeably slower in this appearance, due to a series of strokes he'd suffered in the previous few years. He became more and more frail and senility began to set in; when his younger brother Gummo died in April 1977, his family did not inform him as they feared it would be too detrimental to his health.

Towards the end, as 1977 progressed, Groucho grew weaker and weaker, largely reduced to a wheelchair, and on June 22nd, 1977 was taken to Cedars Sinai Hospital in California with pneumonia. He died little short of a month later, becoming the one with the longest lifespan, though not the last to die - that was Zeppo in 1979. Groucho's death, aged 86, was somewhat overshadowed by the demise three days earlier of someone called Elvis Presley.

Court battles over the distribution of Groucho's estate dragged on well into the 1980s. Eventually, Groucho's son Arthur was awarded the bulk of the assets, while Canadian actress Erin Fleming - who had been Groucho's companion, some say Svengali, in his final years - was ordered to pay costs of $472,000 to the Marx estate. There are accusations that Fleming exerted too much control - reportedly physical and mental - over Groucho and his career, but the woman was not free of her own issues - throughout the 1990s she was constantly in and out of various psychiatric facilities, and in her final years was apparently living homeless on the streets of Beverly Hills. She finally committed suicide with a gunshot to the head in April 2003, aged 61.

Fun gallery: Towards the end of his life Groucho was photographed with a whole host of other famous faces, some of which you would not automatically picture him with! Here's a selection of photos of him with, respectively, Charlie Chaplin; Bill Cosby and Jack Nicholson; Diana Ross; Queen; and Alice Cooper and Gary Glitter. 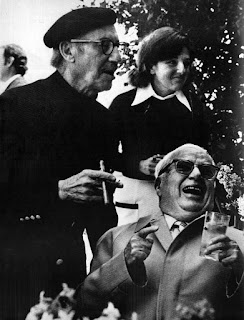 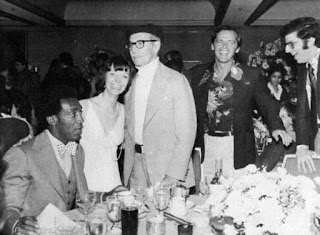 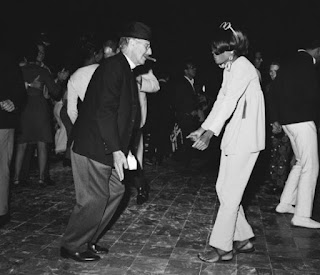 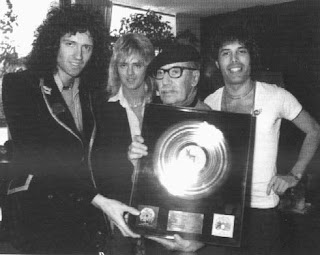 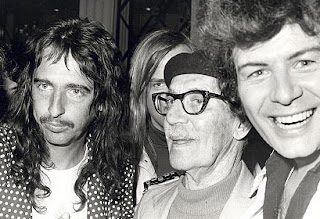 Posted by My Old School Books at 5:24 pm