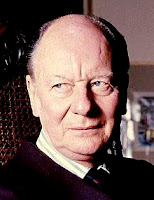 Best known for: English actor and theatre director who dominated the British stage, along with Ralph Richardson and Laurence Olivier, throughout the 20th century. He was an inspiration and mentor to many budding actors who have since gone on to be mentors themselves. He was knighted in 1953, and in 1994 the Globe Theatre was renamed the Gielgud Theatre in his honour. He was twice nominated for an Oscar for Best Supporting Actor - for Becket (1964), losing to Peter Ustinov, and winning for Arthur (1981). He was also nominated for three Golden Globes (winning twice, for Arthur and War and Remembrance (1988)), five Emmys (winning one for Summer's Lease (1989)) and eight BAFTAs (winning for Julius Caesar (1953) and Murder on the Orient Express (1974), and being awarded an Academy Fellowship in 1992).

John was prolific and highly successful and revered for his work on the stage, but even into his nineties, his output on screen never slowed down. After his late 1980s success with War and Remembrance and Summer's Lease, he launched into his final decade with equal success in Prospero's Books (1991), and appearances in TV series such as Inspector Morse (1993), Alleyn Mysteries (1994) and Scarlett (1994).

After his 90th birthday in 1994, he shifted his screen focus back to cinema, appearing in First Knight (1995), Haunted (1995), Shine (1996), The Portrait of a Lady (1996) and Hamlet (1996). His final two years were no less busy - in 1998 he played King Constant in the star-studded mini-series Merlin, alongside Sam Neill, Miranda Richardson, Lena Headey, Helena Bonham Carter, Rutger Hauer, James Earl Jones and Martin Short, while he gave his voice to the 1998 animated film Quest for Camelot, playing the character of Merlin.

Also in 1998 John played Cockburn in an adaptation of The Tichborne Claimant, opposite Robert Hardy, Charles Gray, Stephen Fry and Dudley Sutton, and played the Pope in the biopic Elizabeth, starring Cate Blanchett and Christopher Eccleston.

John's very last screen acting credit was actually in a short film called Catastrophe in which he played The Protagonist. It was a six-minute adaptation of the Samuel Beckett play directed by David Mamet and co-starring Harold Pinter and Rebecca Pidgeon. The 95-year-old John is silent throughout, and his face is only seen in long-shot and for a few seconds in shadowy close-up.

Toward the end of 1999, BBC Newsnight's Jeremy Paxman interviewed John on the stage of the Old Vic Theatre, with him concluding that if he had his life again, he wouldn't do anything differently.

John's long-time lover Martin Hensler died in 1999, after which John went into a physical and psychological decline. John passed away "simply of old age" at his home South Pavilion in Wotton Underwood near Aylesbury on May 21st, 2000, five weeks after his 96th birthday. Also that day, the world lost romance novelist Barbara Cartland. That night, the Gielgud Theatre dimmed its lights in respect, and a small memorial service was held at Wotton parish church, attended by Alec Guinness, John Mills, Maggie Smith and Richard Attenborough. His body was cremated at Oxford Crematorium, Headlington.

A bit of fun: In 1975, John Gielgud appeared as The Grand Inquisitor to Michael Feast's Prisoner in an adaptation of Dostoevsky's The Brothers Karamazov by the Open University. It's pretty intense stuff as OU programming goes, but shows off Gielgud in all his Shakespearean grandeur.