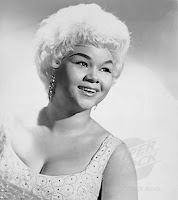 Best known for: Legendary American singer who straddled the genres, including jazz, blues, R&B, soul and gospel, and is believed to have bridged the gap between blues and rock 'n' roll. She was nominated for a Grammy Award 15 times, winning three - for Mystery Lady: Songs of Billie Holliday (1995), Let's Roll (2004) and Blues to the Bone (2005) - and received three further Grammy honours - the Lifetime Achievement in 2003 and two Hall of Fame awards for At Last (1999) and The Wallflower (2008). She also enjoyed a couple of number one blues and jazz records in the States, including 2001's Blue Gardenia and 2003's Let's Roll, while in 1955 she had a US R&B chart-topper with The Wallflower (Dance with Me, Henry).

Etta's 1960s heyday soon gave way to a slump in commercial, but not critical, popularity in the 1970s. She was devastated when the founder of the label which had helped make her a star - Leonard Chess of Chess Records - died in 1969, and although she continued recording for Chess, it wasn't working, and she left the label in 1979.

It was in the 1970s that Etta encountered a string of legal problems, most of them rooted in her addiction to heroin, which she'd been taking since 1961, when she was 23 (she'd tried methadone in 1969 but reverted to heroin). She was in and out of rehab throughout the decade, and in 1972, she and her husband Artis Mills were arrested in Texas for heroin possession. However, Artis took full responsibility and received a 10-year jail sentence. He was released in 1981.

In 1974 Etta was sentenced to undergo treatment for her drug addiction rather than go to jail (for passing bad cheques) and spent 17 months in LA's Tarzana Psychiatric Hospital, where she ballooned to 24 stone (152 kilos). However, this rehab period did not last, and she continued with her substance abuse until, in 1988, she was admitted to the Betty Ford Clinic in California (her addiction never really left her, and even as late as 2010, at the age of 72, Etta was being treated for addiction to painkillers).

Etta did not record any music for the best part of the 1980s. She continued to perform, most notably in 1984 when she sang When the Saints Go Marching In at the opening ceremony of the Summer Olympics in Los Angeles. It wasn't until 1989 - then aged 51 - that Etta returned to the recording studio after signing to Island Records and released Seven Year Itch and Stickin' to My Guns. The success of these albums kick-started a revival of interest in Etta and her work, and throughout the 1990s she recorded more albums and received a number of awards and honours. In 1996, due to its use in a Diet Coke TV commercial, Etta's 1961 recording of I Just Wanna Make Love to You, reached number 10 in the UK singles chart.

In 2008, Etta was portrayed by Beyonce Knowles in the film Cadillac Records, which was based on the 18-year history of Chess Records. Etta had been reportedly critical of Beyonce, particularly when the younger singer performed Etta's signature song At Last at President Barack Obama's inauguration ("She singing my song, she gonna get her ass ripped! I can't stand Beyonce, she ain't no business up there singing! Don't be singing my song that I've been singing forever!"), but these criticisms were later put down to a health condition that was diagnosed that same year - Alzheimer's Disease.

Etta made her final TV appearance (recorded April 7th, 2009) performing At Last on the celebrity talent show Dancing with the Stars (she remained seated during the number). Etta continued to tour, but in January 2010, aged 72, she had to cancel dates when she contracted MRSA and was hospitalized as the bug rejected antibiotic treatment.

On January 14th, 2011 Etta was diagnosed with leukaemia, aged 73, and Artis Mills applied to a judge to grant him access to Etta's bank account in order to pay for her medical bills. Control of Etta's estate had passed to her sons and daughter-in-law. Etta's son Donto fought Artis's application, but the judge granted him $60,000 a month for medical fees.

She released her final album, The Dreamer, on November 8th, 2011, which included covers of songs by Otis Redding, Guns 'n' Roses and Ray Charles.

After being hospitalized in May 2011 with a urinary tract infection and sepsis, Etta's illness became terminal after she was rushed to hospital with breathing problems and Hepatitis C on December 16th, 2011. She was under 24-hour care and was on oxygen

Discharged from hospital in early 2012, Etta finally passed away on January 20th, 2012 - just five days before her 74th birthday - at Riverside Community Hospital in California. It was just three days after Johnny Otis, the man who discovered her when she was 14 in 1952, had died. Her funeral, led by Rev Al Sharpton, took place in Gardena, California, on Saturday, January 28th, and included musical tributes from Stevie Wonder and Christina Aguilera. Etta was buried at Inglewood Park Cemetery in Los Angeles, California.

A bit of fun: Let's end by remembering Etta the live singer. Here she is performing I Just Wanna Make Love to You at the Montreux Jazz Festival in 1993, aged 55 (and about 330lbs!).

Posted by My Old School Books at 1:58 pm