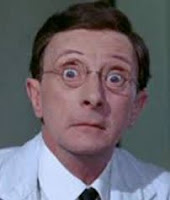 Best known for: One of the regular ensemble cast that made up the Carry On team in the UK in the 1950s, 60s and 70s, although Charles had been a star in his own right since the 1930s, starting as a child performer. Charles was known for his horn-rimmed spectacles and his catchphrase "Oh hello", as well as his effeminate manner.

Charles's career as a Carry On regular was long and memorable. His first appearance was as Peter Golightly in the very first film, Carry On Sergeant, in 1958, and he subsequently made appearances in a further 22 movies, as well as the 1969 and 1970 Christmas TV specials. However, his unrepentant alcoholism was what called time on his Carry On career in the end, and what ultimately sounded the death knell for his performing career overall.

By the 1960s Charles was drinking heavily, and his behaviour was becoming more and more erratic. Co-star Barbara Windsor recalled a scene in Carry On Spying (1964) where Charles passed out on a conveyer belt through drunkenness. It even got to the point where his love of drink was worked into the Carry On scripts, so much so that by 1972's Carry On Abroad, he was seen sunbathing on the beach and swigging from a bottle of sun tan lotion like it was booze! This was his very last Carry On assignment, although the films continued until the end of the decade (he was to have played Cecil Gaybody in the next film, 1973's Carry On Girls, but the role went to Jimmy Logan instead).

Charles's latter career outside the world of the Carry Ons is a sorry affair, but all the more fascinating for it. In 1971, when he was 57, he appeared in the children's adventure series Grasshopper Island, filmed in such far-flung locations as Corsica and Wales, playing Elderly Boy, but footage from this series is rare to find (clips exist on YouTube and Daily Motion, but not with Charles in), despite it being issued on DVD.

Charles also turned to the stage to prop up his income, trading on his Carry On persona in seaside summer shows and pantomimes, including the Carry On Holiday Showtime and Snow White in Rhyl, North Wales, throughout the 1970s, Stop It Nurse in Torquay in 1972, and Snow White again in Nottingham in 1974. He appeared in pantos up until Christmas 1979.

Charles's penultimate screen acting role was in Eric Sykes's celebrated silent comedy short The Plank, released in December 1979, when Charles was 65. This was actually a televised remake of the 1967 original, which Charles did not appear in. His co-stars here included Arthur Lowe, Bernard Cribbins, Charlie Drake, Frankie Howerd and Jimmy Edwards. Sadly, Charles's participation in this film was minimal and somewhat wasted, as he plays one of two lorry drivers (the other being Harry H Corbett) who are travelling with Joanna Lumley, who gets knocked unconscious by a blow to the back of her head from a plank of wood. Lumley collapses, dazed, into the arms of a clearly overjoyed Corbett, and Charles is reduced to giving a pursed look of resignation.

Finally, Charles made a guest appearance in an episode of the children's series Super Gran, broadcast on April 12th, 1987, when he was 72. Super Gran and the State Visit concerned the visit to Chisleton of the Duke and Duchess of Claridge, the former played by Charles. Sadly, Charles really did look his age in this, and was no doubt performing through a fog of alcohol as ever!

In the 1980s, Charles's shambolic appearance could not harm his radio work, and he regularly appeared as Fingers in a trilogy of radio plays by Wally K Daly about a criminal gang, entitled Burglar's Bargains (1979), A Right Royal Rip-Off (1982) and The Bigger They Are (1985), co-starring Carry On contemporary Bernard Bresslaw as well as Peter Jones and Lockwood West.

However, Charles did have a number of non-acting appearances in his later years, including being guest on three editions of the celebrity biographical series This Is Your Life - for Hylda Baker in 1972, Dinah Sheridan in 1979 and Bill Owen in 1981.

In 1976 he appeared as Dracula on the Hallowee'n special of children's game show Runaround (see video at bottom of this entry), and in January 1981, there was perhaps his most notorious personal appearance of all, being interviewed by Roy Hudd on the chat show Movie Memories. Charles appears dishevelled and confused, clearly inebriated and barely able to string a comprehensible anecdote together.

Charles had been living at 117 Middle Street, an old smuggler's cottage in the seaside town of Deal in Kent, since 1968, and had become known as something of an eccentric, often getting drunk in the the local pubs and flirting with students from the nearby Royal Marines School of Music. In his diary entry for December 14th, 1987, Carry On comedian Kenneth Williams records that he met a man who said he once lived next door to Charles in Deal. The man said: "He's always pissed. Several of the pubs barred him. He can get very nasty, you know."

Most revealingly, however, is Williams's diary entry for May 10th, 1970, when he paid Charles a visit at his home in Deal: "Charles came to the door in his undervest, unshaven. On entering, we saw his lunch steaming on the table, so we went off for more drinks till he was ready. He was still unshaven but showed us all over the house, which is rambling and incredibly tat - like a lodging house which all the boarders have suddenly deserted, and that revolting smell of rising damp and cat's fish everywhere. She [sic] produced male physique magazines with a great flourish and meaningful remarks, but they were all quite innocuous. I was horrified to learn then that Charles was travelling back [to London] with us! A nightmare journey of three hours and she had to lose her cigarette holder and search the car at Victoria (where we dumped her) to find the wretched thing. She pressed us all to come again and 'please regard it as your second home'. Before I do that, I'll need the rest home."

In 2010, Wes Butters wrote a biography of Charles which painted an awkward picture of the actor's final years in Deal. He said at the time: "It's 22 years since he died and the landlord of the local pub will not have a photo of him behind the bar because the customers will not stand for it. They hate him, and it's understandable. When he arrived, the locals would ask him for his autograph but he didn't like that and would tell them to fuck off and rip up their pieces of paper. That upset children and angered their parents. He would also refer to people down the pub as peasants.

"By the end he was a bitter drunk who had exhausted his friends with his shenanigans and become reclusive and tormented. It's a tragic story."

Charles hit the headlines on Sunday, August 5th, 1984, when a fire broke out at the 69-year-old's Deal home. Reportedly, Charles had gone to bed with a young rent boy and left a cigarette burning on his sofa, although some reports claim the male prostitute deliberately set fire to the house when Charles refused to pay him. Photos from the time show a fireman leading an emotionally distressed, partially-clothed and wig-less Charles away from his house. Apparently, he'd insisted on being rescued by the biggest firefighter!

On the subject of the fire, Kenneth Williams wrote to Jeffrey Kemp in July 1987, saying: "Yes, Charles Hawtrey is alive. He even survived a FIRE at his home in Deal. When the fireman brought him down the ladder, wrapped in a blanket from the upstairs window, they said: 'You're all right now' and he told them, 'No I'm not, my fags are upstairs by the bed, and my boyfriend's in it'. Later, in September 1987, he wrote: "You were not supposed to laugh about Charles Hawtrey being hauled out of the fire, with the boyfriend languishing in the bed and the fags uncollected. It is supposed to have a tragic ring, like the Wreck of the Deutschland or something. People are always writing asking me how they can get in touch with him. It is all otiose because he never answers letters. When he first retired to Deal I went down there with some friends to visit. Banged and banged on the door to no avail. Eventually a window on the opposite side screeched open and a woman with the hair in curlers shouted rudely, 'You after Charlie?'. 'Mister Hawtrey', I returned haughtily. 'We were seeking Mr Hawtrey'. 'Try the Saracen's Head' she bawled and shut the window. Well, we must have visited half the pubs in the neighbourhood, but eventually he was found, rather the worse for wear. Charlie was in orange trousers, blue shirt and silk scarf at the neck. He was carrying his umbrella as a parasol. The house was awful. Everywhere you went there were these huge brass beds."

On October 24th, 1988, Charles collapsed in the doorway of the Royal Hotel in Deal and shattered his femur. He was admitted to Buckland Hospital in Dover where he was diagnosed with peripheral vascular disease, caused principally by his lifetime of smoking. Charles was told that in order to save his life, his legs would have to be amputated, but he refused the operation, apparently claiming he preferred to die with his boots on!

Charles died three days later, aged 73, in a nursing home in Walmer, near Deal. There is a story that a nurse asked him for his autograph while he was on his deathbed, and he threw a vase at her! Charles was cremated and his ashes scattered at Mortlake Crematorium, near Chiswick in London. There were just nine mourners at his funeral, none of them friends or family.

A bit of fun: Clips of Charles's last screen appearances are few and far between (Movie Memories and Super Gran footage has been removed from YouTube), but we do have his appearance on 1976's Runaround to marvel at...

Posted by My Old School Books at 2:41 pm