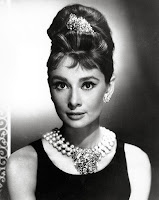 Best known for: Actress who became an icon of Hollywood chic in the role of Holly Golightly in Breakfast at Tiffany's (1961), and in later life became a hard-working humanitarian for UNICEF. She was nominated for five Oscars, but only ever won Best Actress for Roman Holiday in 1953 (the others were for Sabrina, The Nun's Story, Breakfast at Tiffany's and Wait Until Dark, beaten by Grace Kelly, Simone Signoret, Sophia Loren and Katharine Hepburn respectively). And by the way, she was not related to fellow Hollywood actress Katharine Hepburn. It's just not true.

That comeback film was the $5m Robin and Marian, with Audrey playing Marian to Sean Connery's Robin. Now aged 47, the intervening years didn't seem to have touched Audrey's porcelain features and she still looked every bit the film star.

There were three years until she appeared again on screen, as Elizabeth Roffe in 1979's Bloodline, an adaptation of a Sidney Sheldon novel. This was the only Audrey Hepburn film to be rated R, and saw her play the daughter of a pharmaceutical company billionaire who inherits his empire when he dies in a climbing accident. But in traditional Sheldon style, it emerges her father was actually murdered by a member of the company's board, and she goes about trying to find out who her father's killer was - endangering her own life in the process.

The reason Bloodline was R-rated is that toward the end of the film the killer tries to murder Audrey's character as part of a snuff movie, something Audrey did not fully realise until she was halfway through shooting. She apparently turned to the film in desperation for a distraction following the collapse of her second marriage to the adulterous Andrea Dotti (she also turned to co-star Ben Gazzara, with whom she had an affair). Audrey's mistake seems even more unfortunate when you learn that the role had already been turned down by Candice Bergen, Jacqueline Bisset and Diane Keaton - probably for the same reason. Nevertheless, Audrey earnt $1m, plus a share of the gross, which was just as well as, despite costing $12m to make, Bloodline bombed and made only $8.2m back.

This flop didn't put Audrey off, however, and she next appeared as Angela Niotes, the wife of a wealthy industrialist (a theme's developing here) in August 1981's They All Laughed (filmed over the summer of 1980). This was a Peter Bogdanovich caper in which Audrey is pursued by private eye Ben Gazzara (him again!) on suspicion of infidelity. However, this soon turns to romantic pursuit when the detective falls for Angela. Audrey here was 52, but still didn't look too much older than her 1960s heyday.

However, this film was to be overshadowed somewhat by the murder of Bogdanovich's girlfriend Dorothy Stratten, who had a co-starring role. On August 14th, 1980, after filming had ended, she was found dead - shot in the face - in her estranged husband Paul Snider's house. It is thought Snider killed his wife, then abused and raped her corpse before turning the Mossberg 12 gauge shotgun on himself. This murder was later dramatised in Death of a Centerfold: The Dorothy Stratten Story (1981, starring Jamie Lee Curtis) and Star 80 (1983, starring Mariel Hemingway). This is getting very off-topic now, but just to add one last trivial note: in 1988 Bogdanovich married Dorothy's 20-year-old sister Louise after having paid for her private schooling. They divorced in 2001.

They All Laughed (which I'm sure they didn't) was released exactly one year to the day of Dorothy Stratten's murder. It would be six years until Audrey appeared on screen again, in 1987's TV movie Love Among Thieves in which she played Baroness Caroline DuLac, who is forced to steal three Faberge eggs in order to fulfill the ransom for her abducted fiance. It was shown on US TV on February 23rd, 1987, and is a pastiche of many of Audrey's past films, such as How to Steal a Million and Charade. The film's ending left the door open for a sequel, or even a series, but neither materialised, and Audrey donated her salary to UNICEF. By this point Audrey was 58 and although still a beautiful lady, the years were slowly catching up (the severe hairstyle the character is given doesn't help).

Audrey's final big screen role was as an angel in Steven Spielberg's 1989 film Always. The role was a mere cameo, but by this point Audrey's 60 years were telling. Time had caught up. But there were still other appearances before it was time for Audrey to become a real-life angel - she made a whole host of appearances on a great many talk shows, from Wogan in the UK to Larry King in the States. She attended the 1992 Oscars ceremony to present an award to Satyajit Ray, as well as the same year's Danny Kaye International Children's Award for UNICEF.

But it was as presenter of her own documentary series, Gardens of the World, which proved to be her swansong. Although filmed over seven countries over the summer of 1990, it wasn't until March 1991 that the first special episode aired. The series proper was broadcast posthumously, although not intentionally - the programme was scheduled for January 21st, 1993, and Audrey passed away the day before. Audrey was awarded an Emmy for the series, and after also being awarded a Grammy for the recording she made of children's stories, Enchanted Tales, she became one of very few people to have been awarded both a Grammy and an Emmy posthumously.

So, what of her death? Well, I've not touched upon her humanitarian work for UNICEF here as I simply could not do justice to it (she was a goodwill ambassador touring countries such as Ethiopia, Turkey and Vietnam between 1988-92). But when she returned from famine-stricken Somalia in September 1992 she was taken ill with abdominal pains, and in November was diagnosed with abdominal cancer which had spread from her appendix. This rare form of cancer had been growing for several years, and manifested not as a tumour, but as a thin coating over her small intestine. Audrey underwent chemotherapy and surgery, but one hour into an operation on December 1st, the surgeon decided the cancer was too far gone and inoperable.


Audrey, her pain sated by use of a morphine pump, flew to her home in Switzerland on December 20th to spend her last Christmas with her family, and her last days were in hospice care at her home in Tolochenaz, Vaud. She was unable to take anything by mouth, but was occasionally able to take walks in her garden. More often she was too weak. On Sunday, January 17th, she exclaimed, barely audible: "Oh, I am just so tired." Over the following days she slipped in and out of consciousness, until at one point she told her second son Luca: "I'm sorry, but I'm ready to go."

She finally succumbed in her sleep on the evening of January 20th, aged just 63. A funeral service was held four days later, attended by fellow actors Alan Delon and Roger Moore, and her body was interred in a small cemetery at the top of a hill overlooking Tolochenaz.

After her death, Audrey's partner of 13 years, Robert Wolders, said: "Neither the boys [her two sons] nor I could acknowledge that she was dying. We perhaps made a mistake in not telling her how ill she was. I think that was very unfair to her, because Audrey was realistic about death as she was about life. When she began to sense that she was dying, she made us promise that we would let her go when it was time. We promised, but I don't think we followed through."

A lighter end: Such a tragic end for a beautiful person. But fast-forward to 2013 and a TV commercial for Galaxy chocolate in which the wonders of CGI bring Audrey back to very realistic life. A lovely memory to end on...

Posted by My Old School Books at 7:38 pm