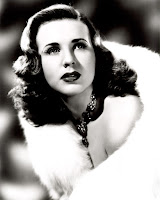 Best known for: Teenage starlet of musicals in the 1930s and 40s who cornered the market in "perfect teenage daughters" in films such as Three Smart Girls (1936) and Every Sunday (1936). She was credited as saving Universal Studios from bankruptcy.

Deanna may have been a runaway box office success playing the sweet little daughter parts throughout the 1930s, but as girlhood gave way to womanhood, she grew more and more frustrated with the limiting roles she was being given. She craved meatier parts than that of Penny Craig, who she'd played in Three Smart Girls and their sequels Three Smart Girls Grow Up (1939) and Hers to Hold (1943). At the time of that third film, she was 22 years old and ready to leave Penny behind.

To instigate this she issued a press release that she was no longer interested in these ensemble films, and she wished to concentrate on solo work. Deanna was a determined lady who had grown up on screen from the age of 14, so knew how things worked and how to get what she wanted. Her box office bankability helped her secure more adult, interesting roles, such as in the film-noir Christmas Holiday (1944) alongside Gene Kelly (the only film of hers she really liked), and Because of Him (1946) with Charles Laughton.

Deanna was a major Hollywood figure at this time - her fan club was the world's largest, and in 1946 she was ranked as the second highest paid woman in the United States (after Bette Davis). The following year, she took that crown from Davis, pocketing $400,000 a film. However, her fan base preferred her in musical films, such as Can't Help Singing (1944 - her only colour film), and that is principally where her future lay in Hollywood, appearing in 1947's I'll Be Yours and Something in the Wind, and 1948's Up in Central Park.

By 1948, though, Deanna's box office clout was waning, and after making her final film - For the Love of Mary, released in September 1948 - she was sued by Universal-International for $87,000 of wages paid to her in advance. Deanna agreed to shoot three more pictures, but instead the studio decided to simply let her contract expire at the end of August 1949, and the three films were never made. Deanna was handed a $200,000 severance package, and never worked again.

This retirement, at the tender age of 26, was Deanna's decision. She'd had enough of the cutesy girl-next-door roles she was typecast in, saying: "I can't run around being a Little Miss Fix-It who bursts into song - the highest paid star with the poorest material." Her decision was resolute - she even turned down two offers from Bing Crosby to appear in his 1949 films Top o' the Morning and A Connecticut Yankee in King Arthur's Court. Ann Blyth and Rhonda Fleming benefitted from Deanna's decision.

So what happened next? Well, already a twice-divorcee at the age of 28, Deanna jumped into her third marriage in December 1950, with Charles David, who had directed her in 1945's Lady on a Train. Deanna and Charles had a child, Peter, and the couple also raised Deanna's daughter from her second marriage. She became a devoted mother, but still got plenty of offers to return to the spotlight - in 1951 she was invited to appear in the London West End production of Kiss Me Kate. She declined. She was asked if she'd appear in the MGM film adaptation of the musical in 1953. She declined. Another job offer came for an appearance in the operetta The Student Prince (1954), but to no avail, while calls for her to play Eliza Doolittle in the Broadway production of My Fair Lady in 1956 also fell on deaf ears. There were even requests for her to sing at Las Vegas casinos, but no - Deanna wasn't one to change her mind. She was once offered a blank cheque to make a comeback in Vegas; she merely handed it back, laughing: "I've had it! I have enough to eat and be comfortable. I want to be remembered, please. as the girl who quit before the public quit her!"

Deanna was never happy with the Hollywood hoop-la, and felt uncomfortable with the image the studios portrayed of her. She always went by her birthname of Edna Mae Durbin, and referred to Deanna in the third person - she was a persona. She was not Edna Mae. In 1972, at the age of 50, she wrote a letter to Modern Screen magazine which provides a fascinating insight into her opinions on her fame.

She wrote: "It really is a surprise to me that after so many years there remains any interest in this 'Deanna Durbin' I have tried to lead to oblivion. Only through being most uncooperative about meeting press and photographers have I succeeded in attaining privacy and peace. Inasmuch as the press, with very few exceptions, has accepted my attitude most sympathetically, it would be unfair to all the reporters and friends who have left my house gracefully, without ever seeing me, should I give an interview or picture to anybody. I have found my fans, too, wonderfully understanding of my endeavour to shed Deanna Durbin in order to live the happy and exciting life of Deanna Durbin David.

"I was not happy making pictures; they wouldn't let me grow up. I always had to be an idealized daughter to the many disappointed mothers and fathers of the 1930s and 40s."

For the rest of her life she shunned the limelight and shied away from publicity, living in a remodeled farm property on the main street of the village of Neauphle-le-Chateau, near Versailles, about 30 miles from Paris, as well as spending time in a penthouse apartment on the Ile St Louis in Paris itself.

As well as the 1971 letter to Modern Screen, there were two more cracks in her otherwise resolute silence - in 1981 she issued an up-to-date photograph of herself to Life magazine to counter the rumours that she was overweight, and in 1983 she gave an interview to film historian David Shipman where she reasserted her right to privacy, which she maintained until the end of her life. However, there were interesting titbits of information she gave in this interview which help flesh out some of the decisions she made about her retirement. Of all the offers she'd had to return to showbiz, she said: "Just once was I seriously tempted, by the prospect of My Fair Lady on Broadway. It was still in an embryonic state, just a few songs completed, when Alan Jay Lerner came to my home to play them for me. I loved them, but I had my ticket to Paris in my pocket, and anyway, Julie Andrews was great and so was Audrey Hepburn in the film."

While not a hermit, Deanna's reluctance to embrace her Hollywood past meant that when she passed away on April 17th, 2013, it was a couple of weeks before the news broke. A newsletter published on April 30th by the Deanna Durbin Society reported that she had died "in the past few days". There were no other details at the time, but it is known that she died from natural causes, aged 91.

Let's end with footage from the one film of hers Deanna was pleased with, 1944's Christmas Holiday. Here she is singing Spring Will Be a Little Late This Year...

Posted by My Old School Books at 2:37 pm