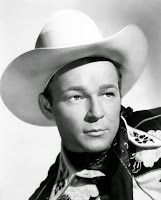 Best known for: Legendary cowboy actor and singer who was an icon of the Western film genre in the 1940s and who complemented his screen career with a string of big-selling Country and Western songs in the USA. He also had his own Roy Rogers TV show, which ran for six years and 100 episodes in the 1950s.

When the final edition of The Roy Rogers Show aired on June 9th, 1957, it also pretty much brought Roy's otherwise illustrious career to an end. Roy was 45 at this point and his style of Western, principally aimed at and merchandised for the juvenile market, was going out of fashion in the wake of grittier outings such as John Wayne's The Searchers or Rock Hudson's Giant.

Roy did not appear on US screens again for more than a decade, and then it was merely a cameo playing a ranch owner on The Red Skelton Hour (January 1968).

There were other fleeting appearances, such as in the Vince Edwards TV movie Saga of Sonora in May 1973, an episode of Wonder Woman in January 1977, and in two episodes of The Fall Guy in January 1983 and February 1984.

He even had a turn yodelling on The Muppet Show in May 1978, appearing alongside his wife Dale Evans.

Of course, Roy's name was immortalised in another way in 1968 when he licensed his name to the Marriott Corporation so it could convert all of its Hot Shoppes to Roy Rogers Restaurants across the USA. Roy had no other involvement in the deal.

In 1991 Roy actually made a music video for his final single release, which he recorded with Clint Black. Hold On Partner was directed by Joe Cole and the single peaked at number 42 in the US Country Chart and 48 in the Canadian equivalent. The video sees Roy and Clint mixed in with black and white footage of Roy's old screen exploits. It's a fitting tribute to a man toward the end of an iconic career.

Roy's final screen appearance was on a July 1993 edition of the Christian talk show Praise the Lord, but I can find no footage of this.

However, there is footage of an interview Roy did alongside Art Linkletter with Dick Dorwald. The interview was conducted in 1993 on the set of a TV commercial for New Ear Hearing Aids, and an 81-year-old Roy can be seen fixing his hearing aid ("when I put it in, the whole world comes alive!").

But whatever happened to Roy's other famous co-stars, Trigger the horse and Bullet the German Shepherd dog? Well, Trigger (born Golden Cloud in 1934) sadly passed away in July 1965, aged 31, and was promptly immortalised through the magic of taxidermy when his hide was stretched over a foam likeness of the horse and displayed in the Roy Rogers Museum in California when it opened in 1967. The museum closed its doors in 2009 thanks to a sagging economy and falling public interest, and the contents sold off the following year for $2.9m. The stuffed Trigger sold for $266,500 at auction, a considerable amount, but considerably less than that paid for Trigger's saddle and bridle ($386,500).

As for Bullet the Wonder Dog, well he was stuffed too and also sold at auction, going for $35,000 (to the same buyer as Trigger, incidentally - rural cable network RFD-TV based in Omaha, Nebraska, which still screens Roy's films to this day, introduced by his son Dusty).

Posted by My Old School Books at 3:36 pm