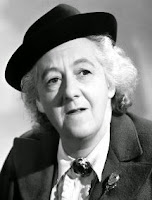 Best known for: Without doubt Margaret's lasting legacy is her depiction of Agatha Christie's elderly sleuth Miss Marple in a handful of films in the early 1960s, but by that point she'd already had an impressive career in British film, principally in comedy. It's little known that Margaret actually won an Oscar and a Golden Globe in 1964, for Best Supporting Actress, for the previous year's The VIPs, although she was not present at the awards; her trophy was collected on her behalf by Peter Ustinov. She was awarded an OBE in 1961, and then a DBE (becoming Dame Margaret Rutherford) in 1967.

It might be more appropriate to detail here what Margaret's early career was all about because most people will know her best from her latterday work, when she was already in her 70s. It seems her characterful, lined and crumpled face is the only way viewers know her. Was she ever young?

Margaret had great success both on the stage and in film for many years to come after this debut, but it was her appearances in two Noel Coward films which really made an impact. She played spiritualist medium Madame Arcati in the 1945 adaptation of Blithe Spirit, and Lady Bracknell ("a handbag?!") in a TV adaptation of The Importance of Being Earnest the following year. In 1952 she swapped roles for Miss Prism in a film version of The Importance of Being Earnest.

It wasn't until 1961 that she landed the role of Miss Jane Marple in Murder She Said, which solidified her legacy forever. She played Miss Marple in a further four films - Murder at the Gallop (1963), Murder Most Foul (1964), Murder Ahoy (1964), and a tiny uncredited cameo in The Alphabet Murders (1966), which starred Tony Randall as Christie's other great sleuth Hercule Poirot (it's the only time the two characters have appeared together).

As the 1960s wore on Margaret's health began to decline, and her appearances became fewer and further between. In February 1966 she had a stint on children's storytime series Jackanory reading various Beatrix Potter tales, and the following year played the bedridden hypochondriac Miss Gaulswallow in Charlie Chaplin's A Countess from Hong Kong.


Margaret's final on-screen role was as Princess Ilaria in Arabella, released in the autumn of 1967 in parts of Europe, but much more widely in the USA in September 1969. She has a key role in this film, as the plot revolves around Virna Lisi's title character trying to help her debt-ridden grandmother (Ilaria) by running rings round Terry-Thomas.

Her animated swansong (goose-song?) was not intended to be her final curtain call, however, as in early 1970 she began filming the Christopher Miles film version of D H Lawrence's book The Virgin and the Gypsy. The film starred Joanna Shimkus and Franco Nero as the eponymous pair, and Margaret was to play the deaf Grandma, but memory lapses forced her to pull out, and she was replaced by Fay Compton.

Margaret was also contracted to appear in the musical Song of Norway (1970) and the TV film The Great Inimitable Mr Dickens (1970), but her failing memory prevented her from remembering her lines well enough to film.


Those memory lapses were caused by Alzheimer's Disease, which cruelly robbed Margaret of her faculties in her final years. She was looked after by her loving husband Stringer Davis (who appeared alongside her in many of her films) until she passed away on May 22nd, 1972, aged 80.

A memorial service was held on July 21st at the Actors' Church in St Paul's, Covent Garden, and she was interred at St James's, Gerrards Cross in Buckinghamshire; her headstone is inscribed with the words "A blithe spirit". Stringer died peacefully in his sleep in August 1973, aged 74, and was interred alongside his wife.

Trivia: Margaret was troubled by bouts of depression in later life, and underwent electroshock therapy in mental health institutions to try and combat it.

In the 1950s, Margaret and Stringer adopted the writer Gordon Langley Hall, who was in his 20s. In 1968 Hall had gender reassignment and became Dawn Pepita Langley Hall, under which name she wrote an autobiography of her adopted mother in 1983. In January 1969 she married a young black motor mechanic in South Carolina, USA - the first legal interracial marriage in history. Dawn's story is a fascinating one in itself - read more here. She died in 2000 suffering from Parkinson's Disease.

And as another added extra, if you still don't believe Margaret Rutherford was ever young, here's a picture of her from the 1890s with what could well be her grandfather... 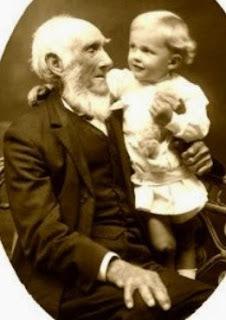