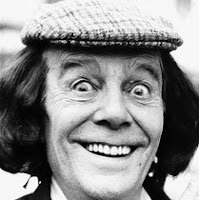 Best known for: Comedian and actor whose career spanned music hall (starting out as The Boy with the Educated Feet), film, TV and stage. He was known for his outlandish appearance, notably long black hair with bald cap, drainpipe trousers and bovver boots, along with a "funny walk" (this was actually the character of Professor Wallofski, inspiration for John Cleese's Ministry of Silly Walks in Monty Python's Flying Circus).

Max's heyday was the 1930s when he appeared in many stage comedies and musicals, never making much of an impact on the silver screen (in the 1930s he made two appearances - 1934's On the Air and 1938's Save a Little Sunshine), and it wasn't until the 1950s, following his war service, that he re-emerged as a more populist entertainer.

His tragi-comic face gave itself well to both straight and funny roles, and as he entered his 60s Max could be found in small roles in the likes of Chitty Chitty Bang Bang (1968, as one of the inventors), The Nine Ages of Nakedness (1969) and Inside George Webley (1970).

Max even got to tour with rock band Mott the Hoople in 1972, but this wasn't his only foray into a music career - in April 1977 he recorded his own version of Ian Dury's song England's Glory, released on Stiff Records backed with Dream Tobacco and given away free with the album Hits Greatest Stiffs, a compilation of early Stiff Records tracks. Max also appeared on stage with Dury at the Hammersmith Odeon in 1978, but was not well received ("they only want the walk", he later said).

Max also popped up in the most unexpected of places, such as soaps, playing Harry Payne in Coronation Street in 1978, Arthur Braithwaite in Emmerdale Farm in 1979, and Walter Soper in Crossroads (1982-83). In 1978 he also secured the recurring role of Tommy Tonsley in the comedy drama Born and Bred, which ran for two years.

These occasional cameo roles came for him right through to the end of his career. One of his most celebrated latter performances was as Flintwinch in the 1988 adaptation of Dickens' Little Dorrit, while his final screen acting credit was as the Stranger in the 1990 movie Dark River, filmed in Kenya.

In February 1989, just over 12 months before he was to pass away, Max was interviewed for a BBC 40 Minutes film entitled I Like the Girls Who Do, which was an appreciation of fellow comedian Max Miller and his work by cartoonist Gerald Scarfe. This was to prove his final personal appearance.

By all accounts Max spent his final years as something of a recluse, his neighbours claiming they barely ever saw him leave his council estate flat. On the occasions when he did, and he wasn't on his way to record one of his occasional acting cameos, he could be found in the local pub, sitting alone, drinking Guinness.

On the afternoon of Sunday, May 20th, 1990, the 82-year-old Max was dining with two friends at the Simpson's-in-the-Strand restaurant, part of the Savoy buildings in central London. As he left the building, he lost his footing and took a fall, fracturing his skull. He never regained consciousness and died in the early hours of the following day at Westminster Hospital. He was buried at Highgate Cemetery. The ironic thing is that Max wouldn't have lived much longer anyway - the autopsy revealed he had a brain tumour and severe heart disease.

Max left £193,000 to four of his five children (his eldest, Michael, was specifically excluded), seven grandchildren and various charities.

A bit of fun: So many of Max's routines were performed live on the stage when no video camera was looking, but in his later years he did enjoy something of a renaissance, and recorded a number of programmes in the 1970s and 80s showcasing his comic talent, including The Good Old Days (1980) and An Evening with Max Wall (1982). Here's a lovingly put-together tribute to the best of Max's talent...

Posted by My Old School Books at 1:27 pm