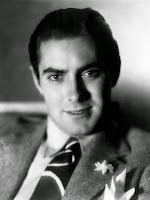 Best known for: Matinee idol in the 1940s and 50s who became known for his swashbuckling, action roles as well as his romantic leads, notably in The Mark of Zorro (1940), The Black Rose (1950) and Witness for the Prosecution (1957).

Tyrone's career can be cleanly divided into two halves - before the Second World War, and after it. Between 1942-46 Tyrone served as a US Marine pilot both on home turf and in the South Pacific, and was elevated to the rank of captain in the reserves in 1951. He was a war hero as well as a silver screen hero, and the first role he took upon returning to the acting profession was Larry Darrell in The Razor's Edge (1946), an adaptation of the novel by W Somerset Maugham about an adventurer who goes off for a decade to "find himself". The film was nominated for a Best Picture Oscar, and won his co-star Anne Baxter a Best Actress Oscar.

Over the course of the next decade Tyrone racked up a pretty impressive list of films which almost all did well at the box office, whether they were costume dramas like Captain from Castile (1947), swashbucklers like Prince of Foxes (1949) or romantic comedies like The Luck of the Irish (1948).

His final film was Witness for the Prosecution, released in February 1958, in which he played Leonard Vole, a man accused of murdering an elderly acquaintance. The $3m film was based upon an Agatha Christie play and directed by Billy Wilder, and boasted some impressive co-stars in Marlene Dietrich, Elsa Lanchester and Charles Laughton. The critics enjoyed Tyrone being cast against type as a "seedy, stop-at-nothing exploiter of women", as the National Post described him, and the film made a profit three times its budget.

After wrapping on Witness for the Prosecution, Tyrone took a role on the stage, playing the lead in an adaptation of George Bernard Shaw's Back to Methuselah. It was March 1958, and just two months later Tyrone would marry his third wife, Deborah Ann Minardos. Deborah would fall pregnant soon after, something that would eventually become Tyrone's ultimate legacy.

On April 13th, 1958 Tyrone would make one of his final public appearances as an award presenter at the 12th Annual Tony Awards at the Waldorf Astoria in New York.

In September 1958 Tyrone, then aged 44, and his wife Deborah, then 27, travelled to Madrid in Spain to film the $5m historical epic Solomon and Sheba, in which he was to play Solomon to Gina Lollobrigida's Sheba. Deborah was concerned about her husband's health and asked him to slow down, but he forged ahead with the tiring filming schedule regardless. It was on Saturday, November 15th, while filming a duelling scene with George Sanders, that Tyrone suffered a massive heart attack, and died en route to the hospital.

Tyrone had filmed 75% of his scenes as Solomon, but in order to complete the film, director King Vidor recast the role and brought in Yul Brynner. Nevertheless, keen-eyed viewers can still spot Tyrone's Solomon in long shots throughout the 140 minute film, and particularly during the duelling scene. Solomon and Sheba was premiered in London in October 1959, just shy of 12 months after Tyrone's passing.

Tyrone Power was interred at the Hollywood Forever Cemetery in a military service on Friday, November 21st, 1958. He was laid to rest by a small lake with a tombstone in the form of a marble bench. At his graveside, and in honour of Tyrone's wartime flying career, Laurence Olivier recited the sonnet High Flight, which had been written by American aviator John Gillespie Magee Jr in 1941 just weeks before his tragic death in a mid-air collision, aged just 19.

When Tyrone's will was read in December 1958 it was discovered that the actor requested that his eyes were donated to the Estelle Doheny Eye Foundation, for possible corneal transplants or retinal study.

Posted by My Old School Books at 2:24 pm