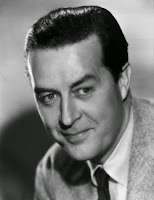 Best known for: Actor and director who never quite made it to the top flight of screen stars, but was ever dependable in classics such as The Lost Weekend (1945, for which he won a Best Actor Oscar and Golden Globe), Hitchcock's Dial M for Murder (1954) and of course his own The Ray Milland Show aka Meet Mr McNutley (1953-55).

As the 1950s gave way to the 60s, Ray's screen acting became less common, but this was only because he was concentrating more and more on directing from behind the camera - he'd made his directorial debut with the 1955 Western A Man Alone, and soon moved into television, helming episodes of The Ford Television Theatre (1956), Suspicion (1958) and Thriller (1961). Ray was also taking roles on the stage during this time, including 1966's Hostile Witness on Broadway (a film version of which became his last directing job in 1968).

March 1981 brought tragedy into Ray's life when his son Daniel, aged just 41, reportedly committed suicide: a rifle was found next to his body on his bed, and he had a wound to his head.

In the 1980s Ray proclaimed several times that he was retiring, and moved to Europe on one occasion, but the lights of the studio never seemed to leave him for long, and he returned to Southern California.

Approaching his eighth decade, Ray's work became much scarcer, and his final few appearances were nothing to write home about. Over Christmas 1984 he played the British Home Secretary in the TV film Sherlock Holmes and the Masks of Death, which featured the great Peter Cushing as Holmes and John Mills as sidekick Watson.

That same year he played a professor in The Sea Serpent, the synopsis of which tells you all you need to know - a nuclear detonation in the Atlantic awakens a long-dormant prehistoric monster, which proceeds to terrorize the Spanish coastline. Ray's oceanographer Timothy Wallace helps vanquish the beast.

The special effects are lamentable - apart from the hilariously silly creature itself, a toy train is used to double as a life-size engine near the film's climax! Clips of this can be found on YouTube, and it is obvious Ray isn't too well in his scenes.

Ray's final acting role is a curious one - he appeared as cantankerous movie mogul Carl Bruhn in a straight-to-video production entitled The Gold Key, which challenged the purchaser to solve the murder depicted in the 75-minute film, find the location of some gold, and be in with a chance of winning $100,000.

It's hard to find any footage from this production, but the video can be found for sale on eBay for around $10.

Ray was apparently present at the televised All-Star Party for "Dutch" Reagan, broadcast on December 8th, 1985, to mark the 40th President of the USA's second term in office, but despite the full programme being watchable on YouTube, I can't spot him. Can you? This would have been Ray's final public appearance.

On Thursday, March 6th, 1986, Ray was admitted to Torrance Memorial Hospital in California for cancer treatment and respite, but passed away in his sleep four days later, aged 79.

At the time his agent Roland Leif said: "He had suffered from cancer for several years but aside from some occasional back problems, his health only began to deteriorate in the last few months." There was no funeral service, and his body was cremated.

A bit of fun: Here's Ray receiving his Best Actor Oscar for The Lost Weekend from Ingrid Bergman on March 7th, 1946 - he must have one of the shortest acceptance speeches in history, as all he says is "Thank you. Thank you very much indeed, I'm greatly honoured" - and doesn't look too sincere about that!