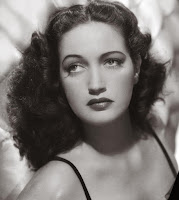 Best known for: Actress and singer who hit gold alongside Bob Hope and Bing Crosby in the Road to... series of films in the 1940s. She was also crowned Miss Orleans in 1931!

The jewel in Dorothy's CV is her involvement in the seven films in the popular Road to... series with Crosby and Hope. After 1940's Road to Singapore, the trio went on to visit Zanzibar, Morocco, Utopia and Rio, with the final regular outing being to Bali in 1952. A seventh film was made in 1962 called Road to Hong Kong, but the main female star of this outing was Brit Joan Collins, with Dorothy only turning in a cameo at the end, singing Warmer Than a Whisper in a nightclub.

This final, rather half-hearted appearance in Road to Hong Kong was a little controversial, as Dorothy wrote in her memoirs that Crosby thought she was too old at 48 to be a leading lady. Gallantly, Hope refused to do the film at all without Dorothy in it, so the cameo was added to the end (Crosby still got his way by not allowing her to be used in publicity, however). It's worth pointing out that in 1962, both Bob Hope and Bing Crosby were 59. Critics of the time did not receive the film well, and pointed out that it seemed unfair of the leading men to ditch Dorothy when their own on-screen magic had waned somewhat. Incidentally, entertainment supremo Lew Grade wanted to revive the series for an eighth outing in 1977, The Road to the Fountain of Youth - with all three original stars back together - but Crosby died before serious work could begin on it.

With Road to Bali putting a temporary hiatus on the series in 1952, Dorothy's film career suffered as a result. She took to the stage and to television, making appearances in the 1953 sketch series All Star Revue and The Red Skelton Hour (1955), as well as one-off TV dramas such as The Mink Doll (July 1955). She even opened a Dorothy Lamour beauty salon in Manhattan's Greenwich Village in 1960, the first of what was an aborted chain of outlets.

In 1963 she took the role of Miss Lafleur in the Lee Marvin/ John Wayne vehicle Donovan's Reef. By this point Dorothy was 49, but her co-star in this film didn't seem as troubled by her age as Bing Crosby had been - Wayne was 56, and director John Ford was 69. However, this resurgence in big screen visibility did not revive Dorothy's career in this respect, and aside from a cameo in the ridiculous 1964 comedy musical Pajama Party (in which a Martian teenager sent to Earth to prepare the way for invasion instead falls in love with unlucky-in-love Annette Funicello), it was back to TV.

Those TV roles included two turns in Burke's Law in 1964, I Spy in 1967, The Name of the Game in 1969 and Love American Style in 1970. As the 1970s wore on, Dorothy became a popular guest on the dinner theatre circuit and in stage productions, but her screen work had a lot to be desired. She joined a wealth of what must have been desperate, or at best woefully misguided, fading stars such as Jay Silverheels, Pat O'Brien, Johnny Weissmuller, Rudy Vallee, Maureen O'Sullivan, Ruby Keeler and Busby Berkeley to give a cameo in the appalling 1970 film The Phynx. This movie was so bad that Warner Bros were reluctant to release it. The premise has amusement value, though - it concerns a rock band called The Phynx getting embroiled with Communist kidnappers while on tour in Albania, where they help rescue various showbiz names who have been abducted by the bad guys. It's the only film which stars both Tarzan and Oddjob from the Bond films.

In the 1980s, Dorothy's TV roles were just as inauspicious. It seems every former glamour girl of Hollywood's heyday had a guest turn in The Love Boat, and Dorothy played Lil Braddock in a 1980 episode. She also turned up in Hart to Hart (1984), Remington Steele (1984), Crazy Like a Fox (1986) and, perhaps inevitably, Murder, She Wrote (1987).

Dorothy made her final screen acting appearance as Martha Spruce in the Old Chief Woodenhead section of the comedy horror film Creepshow 2, released in May 1987. She and husband George Kennedy run a store in the middle of the desert which is invaded by a gang of thugs. The Spruces are murdered, but the gang steals a Native Indian wooden statue which goes about avenging their deaths. While a cheap 1980s horror flick is not the most auspicious of swansongs for an actress of Dorothy's renown, she was nominated for a Best Supporting Actress Saturn Award by the Academy of Science Fiction, Fantasy and Horror Films in August 1988. However, she lost out to Anne Ramsey, who won posthumously for Throw Momma from the Train.

After Creepshow 2, Dorothy retired from acting, aged 73, but did go on to appear on television, most often to take part in tributes or documentaries about her old friend Bob Hope. She appeared at the 1989 Oscars, presented an award at the 1990 Golden Globes and in May 1993 appeared on Vicki Lawrence's talk show. Her final screen appearance was taking part in the documentary Bob Hope: Memories of World War II, broadcast on August 5, 1995, when she was aged 80.

On October 22nd, 1995, the musical revue Swinging on a Star, featuring the music of Johnny Burke, opened on Broadway at the Music Box Theater, with Dorothy Lamour credited as a special advisor. The production was nominated for a Best Musical Tony Award, and the actress playing Dorothy in the show - Kathy Fitzgerald - was nominated for a Drama Desk Award.

Dorothy Lamour died at the age of 81 at her home in North Hollywood on September 22nd, 1996, of undisclosed circumstances, although some websites claim she suffered a heart attack. She was interred at the Forest Lawn Cemetery in the Hollywood Hills of Los Angeles.


A bit of fun... Although the 1964 film Pajama Party was not exactly the sort of standard we were used to seeing Dorothy achieve, it did see her perform the rip-roaring number Where Did I Go Wrong ("in my day we never did it this way..."). Although she looks a little uncomfortable with the routine, she throws herself into it and she's still got the verve and spirit of the 1940s. If you look at her here, it's hard to understand Bing Crosby's opinion that she was too old to be a leading lady...

Posted by My Old School Books at 3:56 pm