Character description: Tarzan - aka John Clayton, Viscount Greystoke - is a fictional character created by Edgar Rice Burroughs in his novel Tarzan of the Apes in 1912. He was a feral child raised in the African jungles by the Mangani great apes after being separated from his parents when their ship was marooned off the African coast by mutineers. As an adult he experiences modern civilisation for the first time, largely rejecting it and choosing to remain in the wild as a heroic adventurer.

When Johnny first played the Apeman he was 28 years old, but by his last appearance he was clocking in at 44. There's a fuller, stand-alone entry on this blog for Johnny Weissmuller here.

Buster's one outing as Tarzan came about when producer Sol Lesser obtained the rights to make Tarzan films from an independent company which had gone bust. Although MGM had the current rights to Tarzan (the Weissmuller films), Lesser's independent contract was still valid, so he set about casting a new Apeman for Tarzan the Fearless. MGM paid Lesser to delay release of his film until their Tarzan the Ape Man had been released. MGM debuted Weissmuller in March 1932, while Tarzan the Fearless was released as both a 12-part serial and a 71-minute feature film in August 1933.

Interestingly, the Lesser contract (dated 1928) stipulated that Tarzan must be played by James Pierce, but the producer wanted a younger, slimmer Apeman, so he offered Pierce $5,000 to step aside, which he duly did. Lesser cast Buster Crabbe, who had just played the Tarzan-like character of Kaspa the Lion Man in 1933's King of the Jungle, and who was a successful Olympic swimmer (he won a bronze at the 1928 Games and a gold in 1932).

After several years in uncredited bit parts, often as sportsmen, Buster's big breakthrough was the role of Tarzan (which he'd briefly screen tested for in 1931 with MGM). Although he was only to play Tarzan once, he became known for his heroic parts, going on to play Flash Gordon in three very successful serials between 1936-40, Buck Rogers in a 1939 serial, and Billy the Kid/ Billy Carson in 36 serials between 1941-46.

Between 1951-54, Buster had his own children's weekday evening show on New York City's Channel 9 (WOR-TV), and latterly WJZ-TV (Channel 7). Between 1955-57 Buster played Captain Michael Gallant in the TV series Captain Gallant of the Foreign Legion, and continued to specialise in Western productions, including Badman's Country (1958), Gunfighters of Abilene (1960) and Arizona Raiders (1965). This last film, a vehicle for war hero Audie Murphy, was Buster's last acting job for 14 years after he decided to retire at the age 57. He became a stockbroker and a businessman, running a swimming pool manufacturing firm, and in the 1950s purchased the Adirondack campus of the Adirondack-Florida School, a swim camp for the under-14s.

Throughout the 1950s, 60s and 70s Buster promoted his interests in the "package pool" company Cascade Industries, and swimming pools were sold by "Buster Crabbe Dealers" in America's eastern and southern states as late as 1990.

Buster also appeared in TV commercials for Continental Airlines, Hormel chili sauce, muscular heat rubs and male body girdles. Buster also continued to swim well into his sixties, and in 1971 - at the age of 63 - set a new world record in the 400m freestyle for his age group. In August 1975 he took part in a Tarzan reunion in Los Angeles to mark the 100th anniversary of Tarzan creator Edgar Rice Burroughs' birth (this can be seen in the James Pierce section of the first part of this Tarzan series).

His final few roles included the 1979 comedy Swim Team, a cameo in a 1979 episode of Buck Rogers in the 25th Century (as the cleverly named Brigadier Gordon), the low budget sci-fi horror The Alien Dead (1980), and a 1981 episode of BJ and the Bear.

This brief flurry of activity ended with the 74-year-old Buster's sorry swansong as veteran Western actor Duke Montana in the 1982 comedy The Comeback Trail, which sees two hapless movie producers cast Montana in a new Western, in the belief that he is too old to carry out the strenuous stunts and will die, leaving them as the sole beneficiaries of Montana's life insurance.

It was an unfortunate way to end his career. The film was released in March 1982, and Buster passed away just 13 months later.

On April 23rd, 1983, at the age of 75, Buster tripped over a waste bin at his home in Scottsdale, Arizona, and suffered a fatal heart attack. He was interred at the Green Acres Memorial Park in Scottsdale.

Herman was yet another Tarzan whose main career was in athletics - he played football in the 1926 Rose Bowl and won an Olympic silver medal in 1928 in the shot put (he threw it just over 51ft). In 1929 Herman moved from Washington to Los Angeles and made friends with Douglas Fairbanks Jr, who helped him get into acting.

Ironically, Herman was cast as the MGM Tarzan in 1931 for Tarzan the Ape Man, but when he broke his shoulder filming the sport film Touchdown, he was dropped and Johnny Weissmuller was cast. The rest is history, but at least Herman did get his shot at playing Tarzan, in the 1935 12-part serial The New Adventures of Tarzan, which was partly filmed in Guatemala. Herman did all his own stunts, but due to financial problems, the production began to run out of money and although he received expenses, he never got paid a salary.

In 1938 a second serial, Tarzan and the Green Goddess, was edited together from footage and rushes from the 1935 shoot, which helped keep Herman in the spotlight but damaged his career as he was typecast in the public's minds as Tarzan, when he really wanted to branch out into better work. As a result, Herman changed his professional name for 1939's My Son is Guilty and became Bruce Bennett, appearing in many Columbia Pictures productions and acting under the assumed name for the next 40 years, in such titles as Atlantic Convoy (1942), Sahara (1943) with Humphrey Bogart, Mildred Pierce (1945) with Joan Crawford, The Treasure of the Sierra Madre (1948), again with Bogart, and Angels in the Outfield (1951), with Janet Leigh. He even found time to serve in the US Navy during World War Two.

He also started to branch into the growing medium of television, taking work in series such as The Texan (1958), 77 Sunset Strip (1958), Laramie (1960), several Perry Masons (1958-65) and Daktari (1968). But by the late 1960s, Herman/ Bruce was getting to pensionable age and the roles began to dry up (indeed many of his career choices had been lamentable, such as sharing screen time with Lon Chaney Jr in the cheap sci-fi romp The Alligator Man (1959) and writing and starring in the woeful B-movie The Fiend of Dope Island (1961)).

In 1970 he secured the role of Bert Daniels in the TV movie Lassie: Well of Love, which took him into the sequel TV series in 1970-71. His last regular part was as a lowly lab assistant in August 1973 sci-fi B-movie The Clones, after which he disappeared for seven years.

His final credit was playing John Vandenberk in a Dutch film released in March 1980 entitled Laat de dokter maar schuiven, a sequel to 1974's Help! The Doctor is Drowning (don't ask). Herman only got the part after the producers failed in their initial bid to cast John Wayne in the part of a rich American returning to his roots to die. It was perhaps just as well - Herman was 74 years old with another 27 years left in him by this point; John Wayne died in June 1979, so may well have scuppered the filming of the movie!

Herman stayed active in retirement, but shied away from personal publicity. He worked as a master salesman on the West Coast for a Los Angeles vending machine business and a real state investor. In 2002, at the age of 96, he went skydiving, at an altitude of 10,000ft, over Lake Tahoe, and also had a book about his life published, entitled Please Don't Call Me Tarzan. He was the first Tarzan to reach the grand old age of 100 on May 19th, 2006, but passed away eight months later at UCLA Medical Center, California, with complications arising from a broken hip. 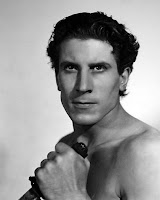 Glenn was yet another Tarzan with an athletic background. He first started setting records when he was in high school (his record in the 220m hurdles stood for 40 years), and qualified to compete in the decathlon at the 1936 Olympics in Berlin, where he scored a record breaking 7,900 points, winning gold. It is said Adolf Hitler was a great fan of his, and offered 6ft 2in Glenn $50,000 to stay in Germany and appear in sports films, which he declined. During these Games, however, Glenn did have an affair with German filmmaker Leni Riefenstahl, but he ditched her when he flew back to the US after the Games. In her 1987 memoir, Leni wrote: "We couldn't control our feelings. I imagined that he was the man I could marry. I had lost my head completely. I forgot almost everything, even my work. Never before had I experienced such passion."

Glenn's athletic success earned him kudos back home: he was welcomed back to Simla on September 12th, 1936, by a crowd of 5,000, and the day was named Glenn Morris Day. He got various jobs commentating sport for NBC, and in 1937 a short called Decathlon Champion: The Story of Glenn Morris was produced. It was after this that Glenn was cast as Tarzan in Tarzan's Revenge (after producer Sol Lesser considered baseball hero Lou Gehrig, but discounted him because of his skinny legs!). However, the 70-minute feature did not go down well, with critics highlighting Glenn's lack of acting skills.

Tarzan's Revenge was released in January 1938, and Glenn had just one more turn before the cameras before he ditched Hollywood for good. In September 1938 he played Spencer in the comedy Hold That Co-Ed, but that was it - after that he went into insurance, and in 1940 played a handful of games for the Detroit Lions football team and the Columbus Bullies, before injury cut short his athletic career.

In the 1940s he joined the US Navy and served in the Pacific during World War Two, but was wounded and treated for psychological trauma for several months in a San Francisco naval hospital. Post-war, he worked in construction for 12 years, and as a steel rigger for the Atomic Energy Commission, but he reportedly fell on hard times and spent a while as a parking lot attendant, and battled alcoholism. He lived out his final years in Menlo Park, California and as a patient in veterans' hospitals, pursuing an intense interest in UFOs.

In 1967, when Glenn was aged 55, he was too ill to attend his own induction ceremony into the Colorado Sports Hall of Fame, where he was proclaimed the "world's greatest athlete". Glenn donated his Olympic gold medal to the Hall of Fame, but it was then passed, along with much of Glenn's sporting memorabilia, to his former high school in Simla, which gave an annual Glenn Morris Award for athletic and academic excellence. In April 2011, Simla High School donated the gold medal to Colorado State University.

Glenn died of congestive heart failure "and other complications" at the veterans' hospital in Palo Alto, California, in January 1974, aged 61, and was buried in the Garden of Inspiration at the Skylawn Memorial Park in San Mateo, California.

In 2012 a novel called Olympic Affair was published by Terry Frei depicting Glenn's life and focusing on his love affair with Leni Riefsenstahl.


To read the previous chapter about the silent era Tarzans, click here. The next chapter in the Tarzan story, looking to the 1950s, is here.
Posted by My Old School Books at 1:05 pm