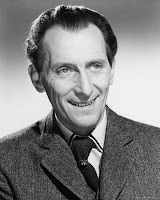 Best known for: Charismatic English character actor who made a name for himself in the horror film genre, principally with Hammer Studios in the Dr Frankenstein role. Peter, who was awarded an OBE in 1989, also took the legendary roles of Doctor Who in two 1960s movie adaptations, and the austere Grand Moff Tarkin in the original Star Wars: A New Hope (1977). In 1956 he won a BAFTA for Best TV Actor.

Peter's Hammer and horror genre portfolio is legendary, perhaps unrivalled, and it wasn't until the British film industry began to falter in the mid-1970s that his career also began to slow, although never stall. The relatively cosy themes of British horror fell out of favour in the shadow of the incoming slasher flick mentality of American imports like Friday the 13th and Halloween (incidentally, Peter turned down the role of Dr Sam Loomis in Halloween, which eventually went to Donald Pleasence). Peter began to shift his focus from mad professors and inventors to calculating military types, often Nazis.

It was probably his turn as the Nazi-esque Tarkin in Star Wars that kicked off this trend. He went on to play an SS Commander in Shock Waves (1977), Heinrich Haussner in Son of Hitler (1978) and a retired Nazi in Tales of the Unexpected (1983).

As he entered his seventies his age began to catch up with him health-wise, and his final few performances were often small - he was a bookstore proprietor in the Val Kilmer comedy Top Secret! (1984) and Seneschal in Sword of Valiant: The Legend of Sir Gawain and the Green Knight (1984).

His penultimate role was actually a return to a part he'd excelled in 16 years earlier, in the 1968 TV series Sherlock Holmes. He reprised the role as a 71-year-old in the TV film Sherlock Holmes and the Masks of Death for Christmas 1984, with John Mills as his Dr Watson and Anne Baxter as Irene Adler. Holmes is retired in this version, but takes on a new case which, perhaps ironically, involves trying to prevent war between Germany and England. Peter was as sharp and charismatic as ever in the part, but sadly this was to be his last TV role.

On May 30th, 1986 Peter made his final acting appearance as Air Commodore Colonel William Raymond in Biggles: Adventures in Time, starring Neil Dickson as Biggles. Peter's character lives in the Tower of London and helps Biggles find his way through a plot about "time twins" and a link from the 1980s back to the Western Front in 1917. In his review for The Times, critic David Robinson labelled the film misguided, corny and inept, although "the principal consolation is a cadaverous Peter Cushing as Biggles's old commanding officer".

This reference to Peter's drawn and angular appearance at this time makes it an apt point to talk about why Peter's later career and life were tinged with sadness. The love of his life, his wife Helen, died in January 1971, aged just 65. Peter withdrew from filming the horror film Blood from the Mummy's Tomb (to be replaced by Andrew Keir). Helen's death broke his heart, and in an interview in 1972 he said: "Since Helen passed on I can't find anything; the heart, quite simply, has gone out of everything. Time is interminable, the loneliness is almost unbearable and the only thing that keeps me going is the knowledge that my dear Helen and I will be reunited again some day. To join Helen is my only ambition. Really, you know, it's all just killing time."

In his 1986 autobiography Peter admitted he contemplated suicide on the night of his wife's death (January 14th), running up and down stairs in the vain hope it would bring on a heart attack. It was a desperate act of grief which he later admitted wasn't intended to be effective; his wife had left him a poem imploring him not to die until he'd lived life to the full, and Peter admitted that suicide would have been like letting Helen down.

Peter threw himself into his work in order to both mask the pain and "live life to the full", as Helen requested. However, his grief had a physical effect on him as well as emotional. His role in Dracula AD 1972 was originally to have been Stephanie Beacham's character's father, but when it was seen that he'd aged visibly and lost so much weight, the part was rewritten as her grandfather instead, despite there only being 33 years between them. This generational rewrite happened again for The Satanic Rites of Dracula (1973).

Peter's grief never truly waned. He continued to play widowed or grieving characters for the rest of his career, and a photograph of Helen appeared in a frame on Van Helsing's desk in The Satanic Rites of Dracula. When he wrote to the British family show Jim'll Fix It in 1986, he wished for a strain of rose to be named after his wife. The yellow Helen Cushing Rose was the result.

Which brings us back to the year of his final acting role: 1986. Biggles may be his final acting credit, but Peter's very last screen acting engagement was actually a cameo at the very end of the music video for The Immortals' No Turning Back (the theme for the film), where he reprises the part of Raymond, turns to the camera and says: "I'm a restless sort of guy".

He decided to retire, at the age of 73, but still made numerous personal appearances on television: several interviews on chat show Wogan between 1986-88, his own This is Your Life in 1990, and even an unexpected appearance in the music video for a dance track entitled No White Peaks around Christmas 1991, on which he provides a recital of a poem about the Falklands Conflict. He was interviewed about the venture on the UK magazine show This Morning in which he admitted the music style "wasn't his scene" but that he quite understood what "the kids" liked about it, as it had a jungle, tribal rhythm. "No wonder the kids are so slim today. The way they dance to it is almost acrobatic!"

Peter was diagnosed with prostate cancer in 1982, aged 69, but miraculously managed to survive 12 more years without surgery, although his health did become fragile. Peter retired to his home on the Kent coast where he took up the hobby of birdwatching and wrote two autobiographies. He was also a watercolourist and wrote and illustrated a children's book entitled The Bois Saga (published May 1994).

Peter finally passed away on August 11th, 1994, aged 81. His close friend and colleague Christopher Lee later said: "I don't want to sound gloomy, but, at some point in your lives, every one of you will notice that you have in your life one person, one friend, whom you love and care for very much. That person is so close to you that you are able to share some things only with them. For example, you can call that friend, and from the very first maniacal laugh, or some other joke, you will know who is at the other end of that line. We used to do that with him so often. And then when that person is gone, there will be nothing like that in your life ever again."

Lee was obviously talking of Cushing, but it could be equally true of Peter and Helen.

As an addendum, there's a beautiful interview with Peter which I can't date accurately, but it's undoubtedly from the early 1990s, where he talks movingly about his wife Helen and his thoughts on faith and the afterlife...

Posted by My Old School Books at 4:38 pm