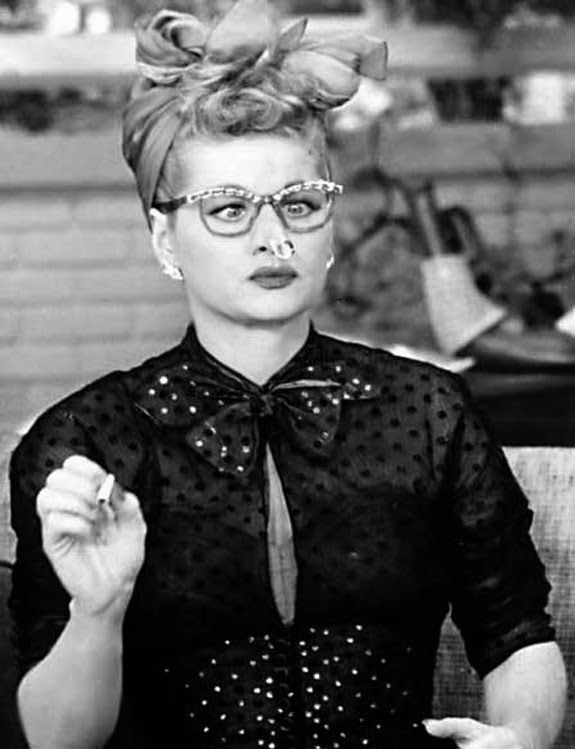 Best known for: Comedy performer who started out as a serious actress in the 1930s and 40s before embracing her talent for comedy, particularly physical comedy, in her own ground-breaking sitcom, I Love Lucy (1951-57), co-starring her then husband Desi Arnaz. Later TV work included The Lucy-Desi Comedy Hour (1957-60), The Lucy Show (1962-68) and Here's Lucy (1968-74).

Lucille Ball revolutionised television comedy the world over with her 1950s sitcom I Love Lucy, and practically invented the template for the next half-century. The fact you feel you've seen it all done before is forgetting the fact you're probably seeing it done for the first time on television, copied and adapted from the best slapstick silent comedians, such as Chaplin, Laurel and Hardy and Keaton.

It's a real shame that Lucille's final attempt to recapture the genius of her television comedy, in Life with Lucy, was such a flop. Lucille was 75 when, in 1986, ABC commissioned 22 episodes of the sitcom, but the ratings took a steady nose-dive and the show was pulled off air after just eight episodes, with five left unbroadcast to this day.

The show has never been repeated or released commercially, and in 2002 TV Guide called Life with Lucy the 26th worst TV show of all time. Can it really have been that bad? Excerpts have emerged on YouTube, so you can judge for yourself.

Lucille appeared on an edition of the game show Super Password alongside Betty White and Estelle Getty shortly before suffering a mild heart attack and being hospitalised in May 1988. She recovered from that, but sadly not for too long.

She made her final public appearance at the 61st Academy Awards ceremony (the Oscars) at the Shrine Auditorium in Los Angeles on Wednesday, March 29th, 1989 - just a month before her death. She was there to join Bob Hope in introducing the Young Hollywood musical number I Wanna Be an Oscar Winner, performed by rising stars such as Patrick Dempsey, Corey Feldman, Ricki Lake and Christian Slater.

On April 18th, 1989, Lucille complained of chest pains while at her Beverly Hills home at 1,000 North Roxbury, and was hospitalised once more. Doctors diagnosed her with a dissecting aortic aneurysm and she underwent an eight-hour operation in which she received the heart of a 27-year-old man who had died in a motorcycle accident.

Lucille awakened following the surgery almost a day later, and seemed to be recovering well. But in the early hours of Wednesday, April 26th, she awoke with severe back pain and lost consciousness. Despite efforts to save her, Lucille died at 5.47am, aged 77, of an abdominal aortic rupture, apparently unrelated to the surgery she'd had a week earlier. After cremation, her ashes were interred at Forest Lawn cemetery in Hollywood, but in 2002 her children decided to move her remains to the family plot at Lake View cemetery in Jamestown, New York, her hometown.

A bit of fun: Here's a lovely appearance by Lucille on The Dinah Shore Show in 1975 in which she is surprised to be reunited with her old I Love Lucy co-star Vivian Vance. Lucille was aged 64 here, and Vivian was 66. Sadly, Vivian died four years later of bone cancer, after having been left partially paralysed by a stroke in 1977.