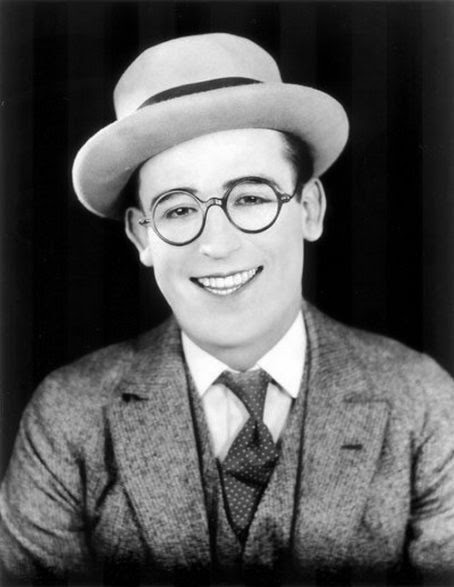 Best known for: His all-action, stunt-driven silent comedy films of the 1920s through to 1940s, most famously 1923's Safety Last! in which he is left suspended from a clock face high above the city.

Harold's heyday was during the 1920s when he produced a great many silent comedy shorts and films with Hal Roach, notably as the "Glass" character (he donned horn-rimmed spectacles as Roach believed Harold was too good-looking for comedy). But during the 1930s his popularity began to decline as the Great Depression promoted cynicism, which failed to match Harold's innate optimism and go-getting persona.

It was in August 1919, while having publicity photos taken for Roach Studios, that Harold had the thumb and index finger of his right hand blown off after mistaking a real explosive for a prop. He attempted to hide this disfigurement in subsequent films using a special prosthetic glove, but it was all too obvious in many shots. This disfigurement can be seen in some of his television appearances when he was in professional retirement (see the final moments of the clip below from What's My Line?, or this photograph of Harold bowling).

Harold decided to largely retire from the film-making profession in the late 1940s. His final regular film appearance had been as Professor Lambert in 1938's Professor Beware, after which he took a nine-year screen hiatus until his final role as the title character in The Sins of Harold Diddlebock, a sequel to his 1925 film The Freshman. It was directed by Preston Sturges but upon its initial release it was a massive flop, so producer Howard Hughes pulled it from distribution and took another three years reshooting certain scenes, and editing it, to improve it. It was re-released in October 1950, a whole 13 minutes shorter than its original version, and renamed Mad Wednesday. However, it did little better at the box office, despite some critics citing it as a comedy masterpiece. This second version was a bitter pill for Harold as Hawks decided to move his name from above the title to below it on the posters, prompting Harold to file a $750,000 lawsuit against RKO in 1953 for breach of contract (he accepted a $30,000 settlement). However, the film did give Harold a Golden Globe nomination in 1950 for Best Motion Picture Actor for Musical/ Comedy (he lost to Fred Astaire for Three Little Words).

Harold appeared as himself on various TV shows, including What's My Line? (1953), This is Your Life (1955), The Ed Sullivan Show (1958) and The Tonight Show with Johnny Carson (1964). However, his reputation hadn't endured as well as contemporaries such as Chaplin or Keaton as he did not allow reissues of his films in cinemas without organs (he disliked pianos) and asked the steep price of $300,000 for TV rights. It wasn't until he produced two compilation films of his silent work in 1962 (one of which premiered at the Cannes Film Festival) that his catalogue was rediscovered.

Harold died of prostate cancer in March 1971 aged 77. His passing was the latest in a triple tragedy, as his wife Mildred had died of a heart attack in 1969, and his son Harold Jr (who was gay and accepted in good spirits by his father) went on to die of a stroke three months to the day after Harold Sr. Harold Lloyd was interred at the Great Mausoleum crypt at Forest Lawn Memorial Park Cemetery in California.

Trivia: Harold Lloyd was a pioneer of 3D photography and Technicolor, and some of the earliest Technicolor test footage was shot at his home in Beverly Hills. He also took nude photographs of models such as Bettie Page and stripper Dixie Evans, and also photographed Marilyn Monroe at his pool in a bathing suit, which weren't published until after her death.

A bit of fun: Here's Harold's appearance on What's My Line? in April 1953, six days after his 60th birthday. You might make out his disfigured hand in the final moments when he is shaking people's hands.