Best known for: Bubbly Betty was a multi-talented personality who acted and sang on stage and screen, but was more comfortable in comedic roles or musicals. She had worked wonders entertaining the troops during World War Two. Her greatest hits included The Perils of Pauline (1947) and playing Annie Oakley in Annie Get Your Gun (1950) - for which she was nominated for a Golden Globe for best musical actress, but beaten by Judy Holliday for Born Yesterday - as well as The Greatest Show on Earth (1952) and even her own TV show in 1959-60. In 1944 she won a Golden Apple Award for Most Cooperative Actress, while in 1956 was awarded Mother of the Year by the City of Hope charity...


Betty was going great guns in Hollywood after enjoying success with Annie Get Your Gun and Let's Dance (for which she was billed above co-star Fred Astaire), but it all came unravelled in the early 1950s when she made a demand which Paramount Pictures refused to go along with - she wanted her then husband Charles O'Curran to direct her next film. The studio said no, so Betty broke her contract with them and the final film she ever made was the understated Spring Reunion in March 1957, alongside Dana Andrews, for which she was paid $100,000 and 25% of the net.

Shunned by Hollywood, Betty turned to other media, including radio and the Las Vegas stage, as well as the small screen. It was on TV where Betty had the biggest impact in her latter career. In September 1954 producer Max Liebman decided to fashion his first "color spectacular" for television as a musical specially written for Betty, entitled Satins and Spurs (it can be seen here in black and white). Sadly, it was an almighty flop with viewers and critics, despite being the first full colour show to be broadcast nationally by NBC. 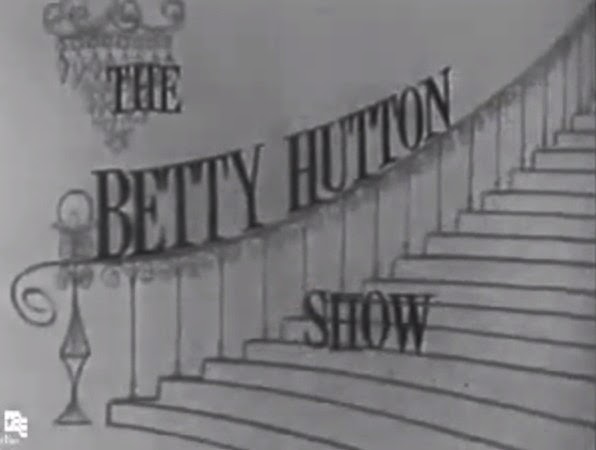 In October 1958 Betty made an appearance on The Eddie Fisher Show, but it was in October 1959 that she got her own show, The Betty Hutton Show, thanks to Lucille Ball's Desilu Productions. It ran for 30 episodes on CBS and featured Betty as showgirl turned manicurist Goldie Appleby, who has a $60m fortune left to her by one of her regular rich customers. However, the show had minimal success, perhaps due to being broadcast opposite The Donna Reed Show, and was cancelled in May 1960.

Betty headed back to the stage, perhaps her natural home, including Vegas and Broadway, but despite being signed up by Paramount in 1967 to appear in a series of low-budget Westerns (including Red Tomahawk with Annie Get Your Gun co-star Howard Keel), she was fired shortly after work began, and replaced by Joan Caulfield. This may well have been because of Betty's increasing dependence on sleeping pills and alcohol to combat her depression following the death of her mother in a house fire that year, and the collapse of her fourth and final marriage. She divorced jazz trumpeter Pete Candoli and declared bankruptcy in June 1967, listing debts of $150,000. After suffering a nervous breakdown, things only got worse for her, when in 1970 she lost her voice and attempted to commit suicide. In an interview at the time, a broken Betty said: "I'm so mixed-up and blue. I just can't take any more setbacks. I don't even have many friends any more because I backed away from them. I think things are going to go right for me again. I'm not old. I'm old enough, but I photograph young, thank God, and I still get fan mail. I don't know where it's all going to lead."

It didn't lead very far, although Betty did manage to pull her life back round, mainly by turning to Roman Catholicism and getting back to basics by becoming a cook at St Anthony's Rectory in Rhode Island. Despite appearing in a production of Anything Goes in 1973, Betty still wasn't getting the work she craved, and in 1974 her former Hollywood pals had a charity whip-round at New York's Riverboat Restaurant and raised her $10,000. Despite this return to the headlines, if not the screen, success still eluded her, but she did have some professional engagements during the 1970s, including playing the role of Miss Hannigan in the first ever Broadway production of Annie. Her final screen role was at the age of 56, broadcast on February 23, 1977 in an episode of Baretta called Everybody Pays the Fare, playing Velma.

As the 1970s drew to a close Betty was happily employed as a hostess at a sports arena in Newport, Rhode Island, having enrolled at the Salve Regina University in Rhode Island in 1975. Her newfound confidence in her private life was down to Catholic priest Father Peter Maguire, who lived at the rectory. In 1980 she really began to go back to basics by moving in with her daughter and grandchildren in California, and also returned to the role of Miss Hannigan on the east coast for a three-week stint. In 1986 she graduated from university with a bachelor's degree in psychology, and two years later, with a Master's degree.

Betty's last ever performance of any kind was on Jukebox Saturday Night in 1983 when she revisited some of the songs and routines she became famous for over a half-hour slot, even referencing the drug and alcohol dependence she'd beaten and hoping for a comeback. Although that comeback never materialised, Betty is still quite a force of nature in this show, full of the energy and laughter aged 62 that she was so loved for in her prime.

After falling out with her daughter, Betty moved back to New England and began teaching comedy acting at Boston's Emerson College. She did conduct an interview in 1990 for a show called American Masters dedicated to writer and director Preston Sturgess, and was also the focus of Robert Osborne's TCM series Private Screenings in July 2000, in which she spoke of her wish to reunite with her daughter. In 1999, aged 68, she returned to Palm Springs, California, where she died of complications from colon cancer on March 11th, 2007, aged 86. She was buried at Desert Memorial Parkin Cathedral City in California. None of her three estranged daughters attended. There are pictures of Betty at home in 2001 (aged 80) and 2006 (on her 85th birthday) on the website of the Betty Hutton Estate, but through respect for their wishes I am unable to reproduce them here. However, here's the link.

A bit of fun: It's far from Betty in her prime, but that showcase she did for PBS in March 1983 is startlingly energetic and nothing less than entertaining to watch, a proper tribute to her talents.

And finally, because they're always so much fun to watch, and because they often show our heroes at their prime and most candid, Betty's appearance on a June 1958 edition of What's My Line, where she can be seen wearing her stage outfit from her show at the Cafe de Paris in New York.