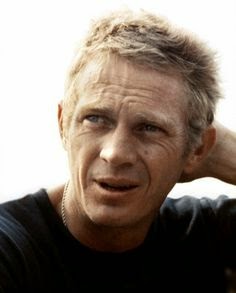 Best known for: American actor who became known for his tough, action roles and anti-hero persona, and often referred to as the King of Cool. His most successful films included The Great Escape (1963), The Cincinnati Kid (1965), The Thomas Crown Affair (1968) and Bullitt (1968). He was nominated for an Oscar as Best Lead Actor for The Sand Pebbles (1966), but lost out to Paul Scofield. He was also nominated for six Golden Globes, winning two of them for World Film Favourite Male.

The mid to late 1960s were Steve McQueen's heyday, but following the huge success of The Sand Pebbles, The Thomas Crown Affair and Bullitt, he began to make fewer films as he became increasingly disillusioned with the Hollywood studio system. 1971's Le Mans was poorly received, but despite this, his role as Doc McCoy in 1972's The Getaway made him the world's highest paid actor.

The last film Steve made which truly had an impact was 1974's all-star The Towering Inferno, after which he took on very few projects, preferring to pursue his real passion for motor racing and travelling around in his motorhome and motorcycles. In 1978 he returned to the screen in an adaptation of Henrik Ibsen's An Enemy of the People as Dr Thomas Stockmann, this time his ruggedly handsome features obscured by a bushy beard.

It was in 1978 that Steve began to develop a persistent cough, so Steve gave up his "King of Cool" cigarettes and began taking antibiotics, while also becoming an Evangelical Christian. However, the ailment did not go away and he began to suffer shortness of breath. It was during the filming of his final movie The Hunter, in December 1979, that he was diagnosed with pleural mesolethioma, a cancer associated with asbestos for which there was no known cure. Steve suspected it was down to him removing asbestos pipe lagging during his time in the Marines in the 1940s, although he also believed asbestos was present in movie sound stage insulation.

In January 1980 Steve married his third wife, model Barbara Minty, but by the following month he was suffering widespread metastasis. In March the National Enquirer revealed he had "terminal cancer". In July 1980, despite being told his life could not be saved, Steve travelled to Mexico for the controversial Gerson Therapy treatment, which consisted of coffee enemas, frequent washing with shampoo, injections of live cow and sheep cells, and massage. For this unconventional type of treatment - which was banned in the USA - Steve paid $120,000 in cash.

Steve returned to the US in October 1980, when his Gerson therapist William Donald Kelley (who was merely a dentist until his licence was revoked in 1976) declared to the media that his patient would be completely cured and return to everyday life. It wasn't long until Steve's illness worsened considerably and he developed large tumours in his abdomen. In late October Steve flew to Chihuahua in Mexico to have a 5lb tumour removed from his liver, despite US doctors warning his heart would not survive the operation.

Steve died of multiple cardiac arrest on November 7th at 3.45am, 12 hours after the failed operation to remove tumours from his abdomen and neck. Reports from the time say he woke first and asked a nurse for some iced water before passing away. Steve's body was cremated and his ashes spread over the Pacific Ocean. In 2012 Steve's widow Barbara joined the Asbestos Disease Awareness Organisation to campaign in her husband's memory.

Posted by My Old School Books at 1:45 pm